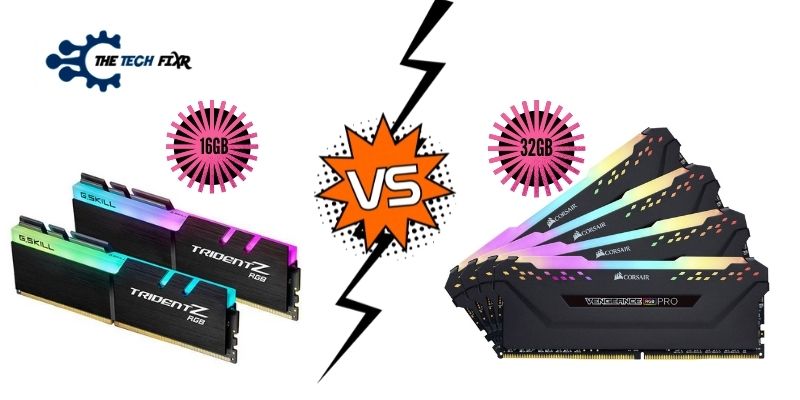 A 32GB ram provides twice the capacity of memory for your PC or laptop to load software, application & browser tabs commands than 16GB ram. A few years back, 16GB ram was for professionals. Still, with the revolution of content marketing & 4k gaming, the demand for more ram gigabytes is increasing.

Even if your PC or laptop has fast storage, it might perform slowly if the random access memory exceeds its requirement. We have compared 16GB Vs 32GB RAM, including a comparison chart and different core factors below.

When you use different software, browser tabs, and applications on your PC or laptop, the load directly goes on RAM regardless of Windows or Mac. Developers make programs so they can take a minimum percentage of any RAM range. That means 32GB provides an additional 16GB space for the software to exceed the minimum ram requirement. It means the fast operation of the software.

While using an Asus ZenBook Duo, 16GB took us less than four minutes to render a video in Sony Vegas Pro 19 and use MS Word, fifteen browser tabs simultaneously.

But for the Asus Rog Flow X13 32GB, it took less than two minutes. Again, proving the difference between 16gb vs 32gb ram video editing is the extra space.

Between the debate 32GB vs 16GB ram, there’s a fair share of myths. Some tech experts call 32 GB excessive work.

Still, the truth is that for full-time professional editing, gaming, or streaming work, 32 GB is a must. The more ram in a pc, the faster it can process per command.

A 16GB can process Creative Cloud within four minutes in Windows for an average size marketing firm. On the contrary to our test, it takes less than two minutes in 32GB DDR4 ram. With the latest Windows 11 update, 32GB works better for bulk content work.

However, for Mac, there’s an exception. Again, M1 Pro(16 GB) and the M1 Pro(32 GB) only have 2 seconds differences to operate Creative Cloud.

A MacBook Pro laptop with 32 GB ram will be great if you freelance graphic design or use programming software like CAD.

There’s little difference between the 16gb vs 32gb ram laptop from Apple; the advantage is more workspace rather than speed.

The Higher the ram space is, the less the CPU takes the data reading time of the hard disk. So, any browser tab or server load directly weighs on RAM space.

Your PC’s operating system takes 1 GB on account of every 4 GB software or browser tab load. For 16 GB, It takes an extra 1 GB against every 8 Gb and 7 GB for 32 gigabytes ram.

If the database is extensive, it will create an additional load for the 16 GB ram to load the server because fewer gigabytes means less space for the server to load.

32GB or 16GB both do an excellent job loading multiple browser tabs and different servers in Windows 11 and macOS Big Sur.

Suppose less than 10 users are using the same pc than 16GB does a super job.

However, call centers and software companies need huge server load, so they should go 32 GB and beyond regardless of Windows or Mac. MacBook creates a swap file for excessive ram load while Windows tends to crash.

Professional engineers, architects, and students have a common question: is 16gb ram enough for software development? The simple answer is yes, and it is the minimum for 2021. Notepad++, IntelliJ IDEA, Emacs run great with Windows 11 16 GB ram.

However, for professionals, it’s better to go 32 GB and beyond. Coding also depends on CPU besides RAM, but as we explained above, the higher ram, the easier it is.

But Programs like AutoCAD and FreeCAD tend to take 8 GB ram. For professional multitasking, going 32 GB should be a wise choice. But between 16gb vs 32gb ram programming students and semi-professionals, 16GB is a sweet spot.

However, Xcode& Sublime Text do a better coding job on Mac. An M1 Max 16 GB chip is enough for smooth programming. But Xcode does take up to 12 GB, including extra cache. If configured with M1 Max 32 Chip, Xcode provides a multi-browser facility due to additional free gigabytes.

In the case of Photoshop, Illustrator regardless of WIndows& MacBook, 32 GB ram works faster. However, we’ve read on Reddit, users asking is 64gb ram overkill for video editing? Yes, it is, and you don’t need it unless you’re a specialist or movie editor.

Modern games now take colossal space, and the bare minimum is now 8 GB. For regular gamers, 16GB is enough and provides a fantastic visual experience. Gaming is a visible and graphics-based activity, so more ram means more space for visuals. Recently released Battlefield 2042 & Call of Duty: Vanguard has a requirement of 8GB and takes up to 13 GB to run in 1080p. Between 16gb vs 32gb ram gaming, both do a great job, but 32 GB overplays in terms of Visual experience and gameplay.

Suppose you are a professional gamer and a streamer. In that case, 32Gb is a must-have because 16 GB can not handle the load of the high-resolution games and streaming simultaneously.

So, between the 16gb vs 32gb ram streaming friendly option is the 32 GB one. Even though 32-gigabyte ram works well, for gaming, it’s better to use Windows. That’s because Windows is easily upgradable, and even older software works in it. You can use a Mac, but Windows are winners at gaming.

The answer depends on your software use and game type. For heavy-duty & professional service, it’s good to upgrade to 32 GB.

Is There A Big Difference Between 16GB and 32GB RAM?

No, there is not that big difference in MacBook, but Windows 32Gb provides a fast user experience.

16GB or 32GB both are high-capacity rams. Unless you’re a professional editor or doing studio works, 32Gb is not a must.

Which RAM Should You Buy?

More RAM does provide more capacity and space for your computer, but regular to semi-professional 16Gb ram should do a great job.

Professionals and specialists like architects, streamers, professional gamers, and digital artists often get confused between 16GB Vs 32GB RAM. To make it clear, they should go for 32GB and beyond for future-proofing.

Then it is so normal to ask a question: why is my graphics card not performing? There can be a slight connector issue that you can easily fix yourself. Some other minor reasons can be standing out...