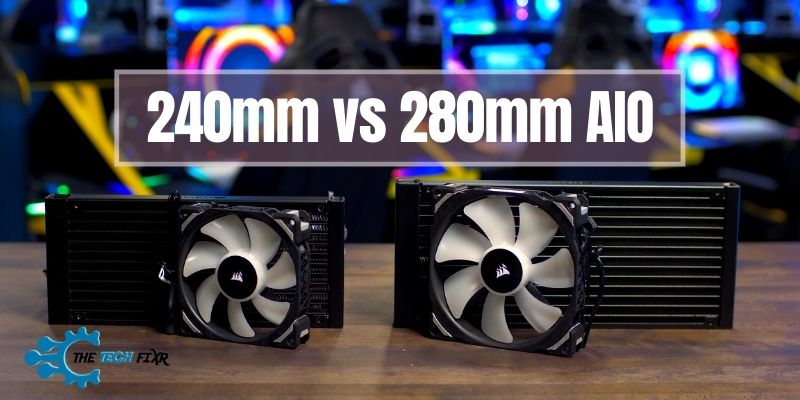 If you are looking for an all-in-one cooler for your CPU, you are probably wondering what is the major difference between a 240mm and a 280mm AIO cooler. The 240mm AIO has a smaller size but less cooling effect. On the other hand, 280mm occupies a bit more space but cools the CPU faster.

All in one water coolers are becoming more and more popular, especially due to the recent release of many new models which tend to crush the competition. And so, the gradual demand for knowing and comparing devices is a must to grab the right one.

So, 240mm vs 280mm aio, which one is a better choice for you? Both AIO cooler sizes are popular in the market. Which one you should get depends on the use of your CPU.

Dive inside to know.

We can compare 280mm AIO vs 240mm AIO based on the following factors:

Radiators are the most critical part when it comes to cooling ability, which means the bigger the radiator, the better performance. Comparing 240 vs 280 radiators, we can easily say the 280 radiator is the better one.

In real life, two different models with the same specifications don’t make a significant difference in lowering your computer’s temperature. So, what are the dissimilarities between these two radiators?

The first aspect to consider is the core’s FPI (Fins per inch). They are zig-zag pieces of the core that raise metal temperature absorption.

For a more effective radiator, you’ll want a higher FPI since it can expand the surface area and cooling capacity by changing the core.

A higher-FPI cooler can outperform a lower-FPI cooler by providing more surface area for heat dissipation. The difficulty is that, while high FPI fans are noisier, they produce more heat as well.

Another option is to use a thicker radiator, which can boost the surface area of the core. You may decrease noises by using less FPI with a big radiator.

The contrast in Cooling Fans

The CPU’s heat-dissipating cooling fans are designed to keep the core cool. This implies that the more airflow the fans produce, the better.

Because of the larger size of the fans, the 280mm radiator typically outperforms the 240mm.

However, keep in mind that although cooling fans are the least essential aspect of lowering your system temperature, the majority of cooling comes from the radiator’s core.

Even if you rely solely on the core’s passive cooling without fans, the temperature difference would be around 10 degrees Celsius.

But for the 280mm, you have to make sure that your CPU has enough space for it. Depending on your device configuration, the performance difference might be negligible.

On the other hand, 240mm radiator has a lower total radiator volume, which means it takes up less space on the case and leaves more room for other drives.

Most of the 240mm AIO makes noise up to 6 dB(A), where 280mm makes less noise than this. On the other hand, 240mm fans take up less space and provide more static pressure for any radiator of 240 vs 280mm AIO.

240mm radiator has a lower airflow rate in 240 vs 280 AIO argument. It can produce up to 75 CFM airflow, where a 280mm radiator can cross 100+ CFM airflow depending on the quality of the radiator.

Hence, 240s usually have lower coolant pressure which is a con for a 240mm water cooler. But it can cope up with lower head pressure and still deliver enough flow.

Almost all 240mm and 280mm comes with socket support for the latest AMD and Intel processors.

However, CPUs at their highest performance radiate a lot of heat. Both 240 mm and 280mm AIOs are great for cooling down high-temperature CPUs.

240mm coolers are enough for gaming and other high-performance activities. But sometimes, you have to use it to its highest potentiality, which can shorten its lifespan. On the other hand, 280mm can cross that limitation. You can play games in a high setting without any overheating issues because of a 280mm AIO.

Then again, most of the AIO coolers come with their own software that can control fan and pump speed. It also monitors CPU temperature to make sure your settings are giving you optimal performance.

These AIOs also come with RGB lights to give you an elegant and aesthetic vibe while playing games.

280mm AIO price is comparatively higher. But you can go with our pick of EVGA CLC 280mm, which can be found within budget coverage in the market.

The most pricy one you may find from the NZXT Kraken series. Their z63 model is undoubtedly one of the best in the market and almost equivalent to any ordinary 360mm AIOs in the stores.

Yes, it performs better cooling, better airflow, and less noise. But all the CPUs don’t have enough space for this radiator. So, you have to pick up wisely before choosing one.

Yes, it can be as long as you can select the best one. If you can go for NZXT Kraken Z63, it will give you an almost equivalent performance to any 360mm. Other 280mms are also enough for any latest Intel and AMD processors.

Which One Should You Pick?

Some gamers think that almost all 280mm AIOs perform the same as 360mm. Theoretically, the statement is somewhat true for high-end air coolers. If you are a gamer and choose from 240mm vs 280mm AIO, you can go for anyone. They are not the same in performance. But it won’t make any significant difference for your gear.

Obviously, if you have the budget, you should go for 280mm as those will perform better cooling, better RPM, better airflow, and less noise.

But the only problem with 280mm is, it cannot be adjusted with all CPUs for its 140mm×2 slot setup. If you have this space problem, then you should go for 240mm. And the performance you will get, won’t be a significant one.