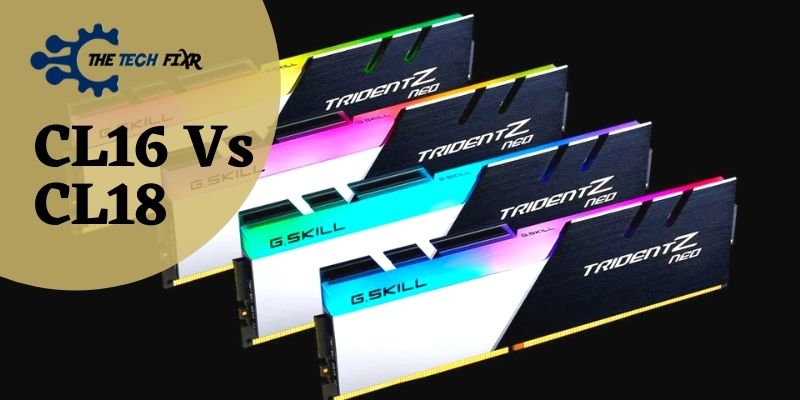 What is the difference between CL16 and CL18 DDR4 Ram? CL16 with higher memory speed RAM can perform the best ever no matter what you do. But this CL difference is slight and hardly noticeable unless you are a hardcore gamer. But for Ryzen CPUs, things can be different.

Nowadays, the debate on CL16 vs CL18 DDR4 RAM is buzzing around users’ heads, especially the gamer folk. We know the headache as there is hardly any clear explanation that can help to squeeze out the real juice.

Have a sigh because today we will be getting your back. In this debate, we have made that happen by exploring some real benchmarks and user experience.

Let’s get into the battle!

Let’s have some detailed views to get into the root.

The prime difference on which the whole debate depends is the CAS Latency. CAS latency refers to the clock cycle number a memory needs or completes to process the task or command from the CPU parts.

So, in this sense, the general rule of thumb is the lower the CAS latency is, the faster the performance speed will be.

You can find this (CAS) Column Access Strobe number in the memory stick where there is a series of 3 to 4 numbers, and the first one is the CAS latency.

Similarly, the 3600 MHz CL18 offers a slightly slower performance speed than the 3200 MHz CL16 Ram. But this difference is around 5% and is hard to notice.

However, if you are an intense level gaming freak and love a smooth gaming experience, you can observe a percent or 2 faster monitors refresh rate in a 3600 MHz 16CL memory than the 3200 MHz 16CL.

Most people don’t bother about the CL (CAS Latency) rating while buying a RAM. Instead, people just go for the higher memory speed only.

But when you get the higher frequency speed and don’t get the desired performance output, most of us just blame the brand or Ram quality. Maybe here, the latency was not rightly chosen.

The latency time is basically the time delay that memory needs to complete a clock cycle per second. And this latency time is calculated by dividing the memory speed by CAS latency.

It means both Ram take around 10 nanoseconds of delay time to receive the commands given by the CPU and process the data for that command.

So, here in the case of memory latency time, there is not much concerning difference at all.

Now, let’s come to the point for different CPU compatibility. If you buy RAM for your Ryzen based CPU, the performance can be disappointing despite the higher memory speed.

But why? AMD Ryzen CPU chips and the CPU core come with their own clock time features. And so, the entire system is better known as the infinity fabric core system. And this infinity fabric system has its own clock cycle known as FCLK and is mostly limited to around 1800 to 2000 MHz clock speed.

And this FCLK can work with its best output when the memory speed is double its clock cycle. And this directly can affect the latency time in the infinity fabric system.

However, if you don’t consider the 2% to 3% slight disparity you can face only on the gameplay, going with 3200 MHz 16 CL like the Crucial Ballistix is not a wrong choice.

We talked in much detail for AMD CPU. Now, what about the Intel CPU? Well, in the Intel CPU, things don’t come with so tighter clock time to sync with the memory clock time.

So, going with a DDR4 3600 MHz CL18 and overclocking it to CL16 can be more beneficial on the Intel core PCs.

On the other hand, a 3200 MHz Ram with CL16 can perform its best, but you can hardly notice the latency delay until you prefer the intense level of smooth gaming experience.

Hence, when it comes to choosing from CL16 Vs CL18 Gaming purpose, CL18 with higher frequency speed can work best. Besides, if you run the DDR3 and want to upgrade the memory, HyperX Fury 3600 MHz CL18 Ram can be a better deal for money with the XMP profile motherboard.

Are you tight with the 2 hyped memory kit CL16 3200 MHz and CL18 3600 MHz Ram? Want a snappier system for your gameplay? Go for the one that can better sync with your system.

Are you an Intel user? Then, a 3600 MHz DDR4 Ram with CL18 can offer the best performance speed along with the clock timing.

And many have reviewed to get the best speed performance from TEAMGROUP T-Force 3600 Mhz CL18 Ram as they are compatible with Ryzen 3 and 5 series.

Moreover, you can also enjoy the overclocked latency speed tuning with the memory speed by enabling the XMP profile.

Price Point is Another Crucial Fact

So, unless you are tight with the clock speed and want to make the system a bit snappy and smooth FPS at gameplay, going for the 3200 MHz CL16 is a worthy budget option ever.

However, if your primary concern is smooth gameplay, this small price should not be a significant fact for you.

If the debate is 3600 CL18 Vs 3200 CL16 Ram, the decision depends on the major purpose- a snappy system with tighter clock time or averagely best performance.

However, if you don’t bother with the clock speed, only the memory speed, the budget-worthy Corsair Vengeance RGB 3200 MHz CL16 is quite popular for both gaming PC and aesthetic looking within price value.

Both are better and can perform their best with higher memory speed. The only difference comes when it’s about smooth gameplay and the system where you are installing the kit.

Undoubtedly yes, unless your system is not the Ryzen 1000 or 2000 series that only has the clock time speed set up to 1600 MHz. So, going over 3200 MHz memory speed here won’t speed up the system speed.

Though most likely to deal with the memory speed, not the CAS latency, it really matters when it’s about getting the exact clock timing and a snappy performance system. You can feel the importance of proper CAS latency in memory to sync with the CPU data process for a smooth gaming time.

What Should You Choose?

To sum up the debate between CL16 vs CL18 Ram, Cl 18 with 3600 MHz frequency speed is preferable. Unless you want tighter clock time speed, the 3200 MHz CL16 memory can be the better bet for bucks.

However, if you own the modern Ryzen 3000 CPU and want to squeeze out the exact clock speed of the infinity fabric system, 3600 Mhz Ram with CL18 clock speed should not be missed for a few bucks.

Now, the decision is yours. Check your system first, then your purpose. Finally, go for your weapon for the best performance.