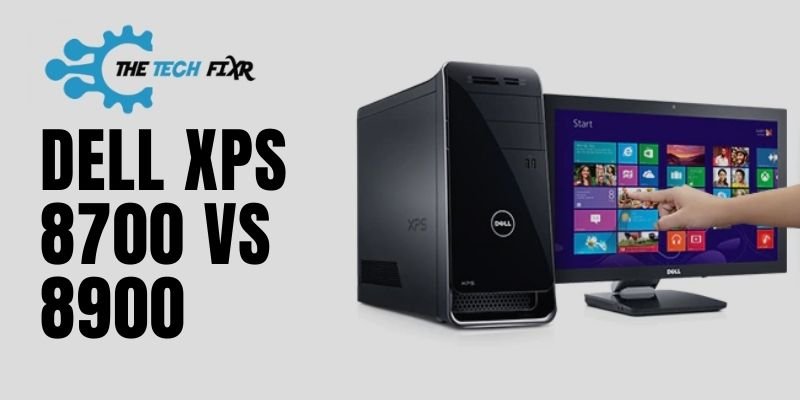 Which Dell CPU is worth buying from Dell XPS 8700 vs 8900? Both feature quite the same specs then; what is the difference between XPS 8700 vs 8900 Dell? The difference is minimal with some upgrade in 8900- the M.2 slot vs MSATA. But this matters when you buy a gaming performance PC.

After the release of the Dell XPS 8900 model, 8700 seemed to be going out of the list. However, with some updates on  XPS 8700 with core i7, users can enjoy almost the same performance.

In this article, we showcase those highlighting features that differ between the two. Besides, other considering facts you can find for the quality buy, of course.

So, get into the depth.

Explore all the featuring dissimilarities for 2 of the Dell CPU series.

Why Should You Consider It?

When you’re thinking about performing on top with some mid-level task variation, Dell XPS 8700 is still considerable for you. Though comparing XPS 8900 and 8700 is one step behind, it can win over your task performance level if you’re not that techie geek with the latest tech-taste freaking insane.

You can have a quick glance over the highlighting spec breakdown.

Starting from the Core- Processor Specs

XPS 8700 Dell features the 4th gen Intel core i5 ad i7 processors with a 3.4 GHz clock speed rate that you can maximize up to 3.9 with Turbo boost technology.

Intel Z87 Express processor chipset is not on the backlist. However, LGA 1150 socket CPU featuring this XPS 8700 desktop can provide you with the optimal upgraded performance that you might be desiring.

For an optimal upgrade in 2021, this CPU can perform as one of the top-performing CPUs. Oh, you can also get XPS 8700 with the latest 11th gen core i7 that is on the hype now.

Memory Features can be Optimal

This is the phase where you might sniff due to the DDR3 memory support of XPS 8700. But the fact is you can enjoy the most from your productive works- including image editing, multi-tasking, to other corporate-level tasks.

It has the option to extend up to 32GB 240-pin DIMM DDR3 memory. And this is high enough for video editing, fast video rendering, and working with multiple tabs open at the same.

Its build quality is no less in flexibility from the Dell Inc. you might find the earlier XPS 8700 CPU a bit smaller design, but the new special edition comes with more expandable features for more fun with your CPU upgrades.

That is why still this 4th gen i5 featuring XPS 8700 is on the hype of selling. People are having this CPU though not expanded to DDR4 RAM, still loving and rating the best one so far.

Along with the DVI, micro-HDMI, and display port, XPS 8700 has enough 3.0 USB and 2,0 USB ports both on the back and the front side of the case.

And the traditional 19 in 1 memory card reader on the front side sometimes seems to be a lifesaver for easily getting access to your media without looking for an additional card reader or OTG cable.

XPS 8700 allows the dedicated Graphics of NVIDIA GTX 750 Ti with moderate to the optimal performance boost up. And people find this suitable for their official task done fast without more lag or memory cache.

The Dell manufacturer no longer continues Dell XPS 8700, but the latest special edition of the XPS 8700 series with excellent features and performance upgrades are available like we mentioned here, the 11th gen XPS 8700. From casual browsing to professional editing and editorial tasks, still, people go for the XPS 8700.

Why Should You Buy It?

The best feature people get attracted by it is the DDR4 memory slot with faster bandwidth. If you’re a crazy performance enthusiast, undoubtedly, Dell XPS 8900 can meet your needs with some additional upgrade opportunities available.

Check out its entire cross-section.

The power system included with this XPS line Dell CPU has min 50 °F to max 95 °F of operating temperature.

All the next-gen features you may want can be found in Dell XPS 8900 series.

XPS 8900 series Dell CPU is compatible with the 6th quad-core i5 and i7 processor, though most we got is i7-6700 with 3.4 GHz frequency clock speed that can be gained up to 4GHz with Turbo Boost.

With the Intel Z170 processor chipset, you can smoothly run your high-configuration video editing software and even work with opening multiple tabs at the same.

The bigger catch XPS 8900 catches in the memory line. 8900 series can be available for DDR4 RAM support that was not with the 8700 series.

Now, DDR5 is on the next line RAM slots for the next-gen faster memory speed. So, the tech-savvy love to have the latest upgrade so far with 8900.

No Compromise with Design & Ports Availability

Dell CPUs always has been comfortable with their ports. The front side features a comfortable angled USB port design for fast and easy connecting.

The 19 in 1 card reader on the top of the front side is still leading the tradition of the XPS series.

For ease in computing, there is much availability of USB 2.0 and 3.0 USB ports on the back panel that lets you connect all your input devices.

However, the VGA port, HDMI port are not lacking here in XPS 8900 also.

Dell XPS 8900 CPU gives you the option to expand your PC performance with max 2TB storage that makes enough room for up to 3 HDD bays.

The case design is roomy with tangle-free cable management opportunities.

Besides, XPS 8900 gives you the option to choose a discrete graphics card up to 225W of power. So from the top-level performer in the gaming world to highly productive video editors, XPS 8900 can give the best ever availability to terminate the flawless task.

In comparison with XPS 8700, 8900 is rich in performance results and updated feature availability. The M.2 slot is the central fact that differs from XPS 8700 experienced by most of the users. For the intense performance lover and aggressive techie players, XPS 8900 can be a better choice, though more upgraded series of 8900 like peoples’ favorite 2021 Dell XPS 8940 with 11th gen i7 has been ruling in market list.

In the debate of Dell XPS 8700 vs 8900, it is pretty challenging to make one prior over the other. However, both feature almost the same quality specs and performance results.

But if you closely observe the performance benchmark testing, XPS 8900 may win the spot for intense overclocking speed performance and faster memory bandwidth experience.

However, 8700 is also in the choice list of some general to professional creators who don’t need to play with the performance speed and graphics intensity rather than a better productive output.

By the way, our enthusiast techies only want to look at the XPS 8900 or the later upgrades as XPS 8930, and XPS 8940 is on the top-notch quality listicles nowadays.