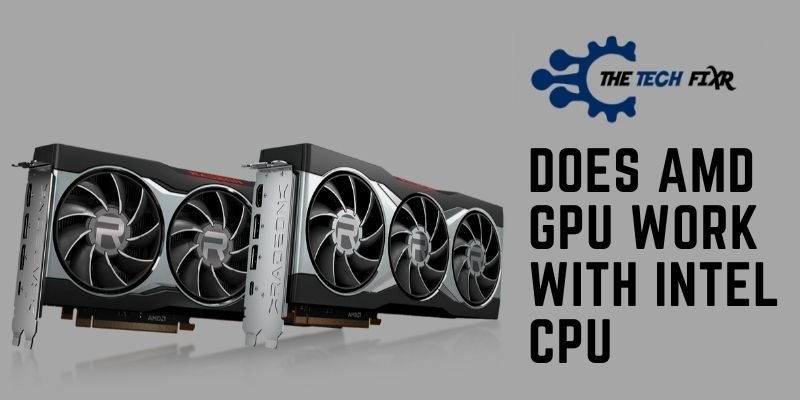 To get to the sweet spot of compatibility between a GPU and a CPU, there are many factors to consider. But does AMD GPU work with Intel CPU seamlessly to give the performance you want?  Yes, it works without major issues but some conditions also apply.

Regardless of it being a gaming PC or workstation – you have to source your computer parts from between AMD and Intel.

These two giants have been struggling for domination for some time. And the users reap the rewards as they deliver top-notch products by trying to out-perform each other.

Now, let’s dive into the detailed answer straightaway that prompts our discussion.

Table Of Contents show
1 Does AMD GPU work with Intel CPU?- Explained
2 Does AMD GPU Work Better With AMD CPU?
3 Take-Home Point
4 Frequently Asked Questions (FAQs)
4.1 Can you use an AMD graphics card with an Intel CPU?
4.2 Is Nvidia better with Intel or AMD?
5 Fainal Words

First, let us answer the question– an AMD GPU will work just fine for an Intel CPU as long as the slot is compatible.

Let us elaborate a bit more.

AMD and Intel provide us computer parts that we can substitute comfortably with each other.

CPU (Central Processing Unit) is known mostly as the processor. It is the principal electronic circuitry carrying out instructions that essentially comprise computer programs.  GPU, on the other hand, is another electronic circuit that employs computer memory to convert and accelerate the reconstruction of images that we watch on display devices.

AMD and Intel both produce GPU and CPU that are compatible for use interchangeably. You can have an Intel compatible GPU from AMD for an Intel CPU and have both AMD with Intel working for your system. It’s like having AMD Radeon or, more specifically, AMD Radeon Graphics cards like Radeon RX 6800 series working in perfect harmony on Intel Core i9 CPU, and vice versa.

Now, let us point out just one incompatibility issue you might face between AMD and Intel. That is, if you have an old Intel CPU and the latest-generation AMD GPU, the GPU might not work. But that can happen even for the same vendor – like an older CPU, and the latest release of GPU from Intel may not work together as well.

So, to paraphrase the question once again – AMD GPU and Intel CPU do work with each other, and mostly the issue can appear when you’re working with multiple GPU setups.

If you have read everything that we have said so far and are still with us – you probably are wondering what if you used an AMD GPU with an AMD CPU. Would the AMD GPU work better with an AMD CPU?

It may surprise you, but the answer would be something like this – it simply doesn’t matter.

Some AMD purists may provide some intense metrics to prove otherwise. One of them would be that using the most recent AMD GPUs with AMD CPU would perform a bit better than other combinations – especially for performance in gaming criteria. But the difference is negligible, and, for most of us, it simply doesn’t matter.

Before choosing AMD or Intel, you need to have your basics stripped from confusion. It is crucial to know beforehand what values a computer is going to add to your life.

However, in simple terms – what are you going to do with your computer? Do you want to use your computer for precision gaming or for fast calculations for your coding performances? Think about them and find out the answer.

You will notice that in your assorted pack of computer parts, there are a lot of boxes both from AMD or Intel. And when you are done assembling, you will be happy to know that AMD and Intel work just fine with each other at your home – regardless of being the cutthroat competitors in the outside world.

Can you use an AMD graphics card with an Intel CPU?

Is Nvidia better with Intel or AMD?

The fact is that Nvidia graphics cards aren’t better or worse with one than they are with the other. Nvidia builds the graphics cards in such a way that they just require compatibility with PCI Express, rather than being compatible with AMD or Intel. So, it simply doesn’t matter with which CPU, Nvidia is connected to.

We know, both AMD and Intel have long ranges of different products compatible with each other. So, you needn’t really be concerned about does AMD GPU work with Intel CPU or not.

Both of them provide premium products and are known for their long and illustrious history of competitiveness. And in the end, that keeps benefitting the users. And we keep getting innovative products for competitive pricing.

And we believe it’s more important for us to know why we choose any brand than what brand we choose to do that task.