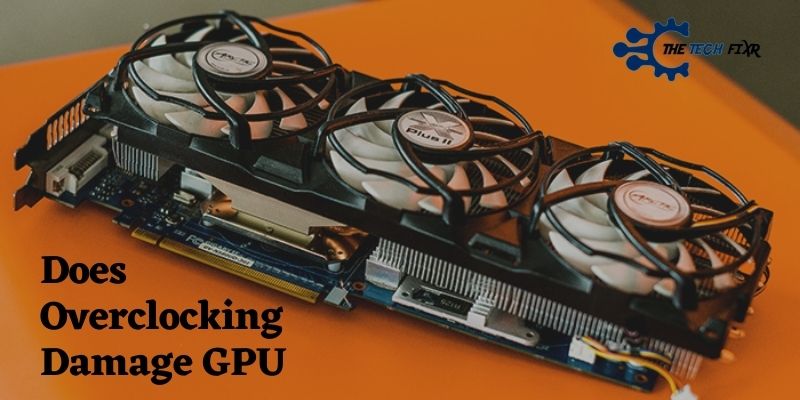 The new games these days spare no effort to give the players an immersive experience with incredible visuals. And to cope up with these demanding visuals, we mostly opt with overclocking our Graphics Card instead of buying a new one every now and then. But does overclocking damage GPU? The direct answer is no, but conditions apply here, too.

None of us have gone to the overclocking part without wondering if it would harm our precious graphics card.

Hence, we present to you another article clarifying all the doubts we come across before tweaking our video card.

So let’s get started.

No, boosting the clock speed or video memory will never damage GPU by itself. The factors that may damage the longevity of a video card rather depend on voltage and temperature.

Although they can also be linked back to be the cause of overclocking, the process itself will in no way harm your GPU.

Even if you overclocked GPU too much, it gives a stable performance along with moderate heat generation should be good with GPU.

Though it is better to do a stress test with Uningine or any other benchmark software to check the stability at that clock speed, you should wonder no more what happens if you overclock your GPU too much.

Overclocking your video card is a free and legit way to gain the extra FPS and performance boost. So, if you lack decent fps in any game, it is plain sailing to try your chance with overclocking.

And, even if your GPU can’t deal with the extra speed you want to feed, it will have a non-fatal crash. Any GPU is robust enough to tackle such a crash.

However, it is better to know about the consequences of boosting your GPU’s clock speed and memory beforehand.

It is not because your GPU will inevitably degrade in the process. It is to rather be on the safe limits of overclocking your graphics card.

So, we’ll discuss the pros and cons of overclocking GPU in the following part.

When you overclock your GPU, the best perk you get is the performance boost. Every video card comes with extra room for improvement, which you will notice monitoring the clock speed of your GPU on load. So, why not use the free extra room for a decent fps boost of your favorite game.

So, yes, you also get more fps, far more in Low Graphics setting and less but significant in the High Graphics setting. You need to turn off the Vsync, however, in both cases to see the actual differences. It can also decrease the latency of graphics processing and render even faster.

The list of benefits may seem small but let not the number confuse you. Even any of them individually is worth tweaking your graphics card too. You also need not ask around what is a good core clock speed for a graphics card.

Settle for whatever clock speed is stable and delivers the most nuanced performance if the GPU generates limited temperature while gaming and heavy core loads, you should not have any worries.

There is no direct downside to overclocking GPU, as we have mentioned earlier. There are, however, a few factors that you must take notice of. The temperature, heat, and power supply can indeed affect the lifespan and performance quality of the Graphics Card.

But, they too, fortunately, are not obvious to every overclocked GPU. However, it is better to know when to stop overclocking GPU.

Boosting the supplied voltage along with the GPU clock speed is an optional step of overclocking, and you can further push your machine with it. This optional step, however, can damage your GPU gradually if the voltage crosses the limit.

As within safe voltage, the silicon semiconductor of your GPU doesn’t degrade notably but crossing the limit causes it to. So, if you ask, “will overclocking damage GPU?”

Including the voltage increase, it may damage, yes. But, excluding this step, you are safe to go and temperature fluctuations are not instantly fatal like voltage.

Also, before boosting the clock speed or voltage of your video card, it is wise to check the safe temperature limit.

A quick tip for you, if your voltage does not fluctuate in a benchmark test, then it won’t be necessary to boost voltage. In some of the recent releases, the GPU voltage can’t even be modified. Not an entirely bad initiative if you ask me.

So, throughout the process and even after getting a stable performance, monitor the voltage and temperature of your PC load.

If they are stable and safe, you are good to go. If not, revert a step backward. Also, a good cooling system always helps sustain the quality and lifespan of your GPU.

Is it worth overclocking GPU?

Yes! The extra FPS and performance boost for graphics-heavy projects and games are worth it as there is already some extra room for improvement in every GPU. However, take necessary measures as suggested in my guide to be safe.

Yes. You will get a decent increase in FPS on High Graphics settings and a massive boost on Lower settings. To take the FPS boost effect to take place, however, you need to disable Vsync.

If it increases the performance of your machine, then I would suggest it because modern graphics cards are being more susceptible to modification. Moreover, the performance upgrade is free and almost effortless. So, yes, you should.

Should I overclock GPU for gaming?

Yes, Overclocking GPU enables you to have decent FPS in a visually heavy game. A stable overclock is definitely welcome if it boosts your gaming performance.

Is it safe to overclock GPU?

Overclocking a GPU is very safe if you monitor and maintain the temperature and voltage of the GPU within a safe range. Even if you overclock the GPU up to a point where it crashes, it is a safety measure of the GPU, and such crash will not harm GPU.

If you need more efficiency from your GPU, don’t take the disadvantages of overclocking as a red flag.

If you have gone through them, we have mentioned ways to avoid each of them.

So take your shot and advance until you get stable performance. And we hope insecurities like- does overclocking damage GPU or not will hold you back no longer.