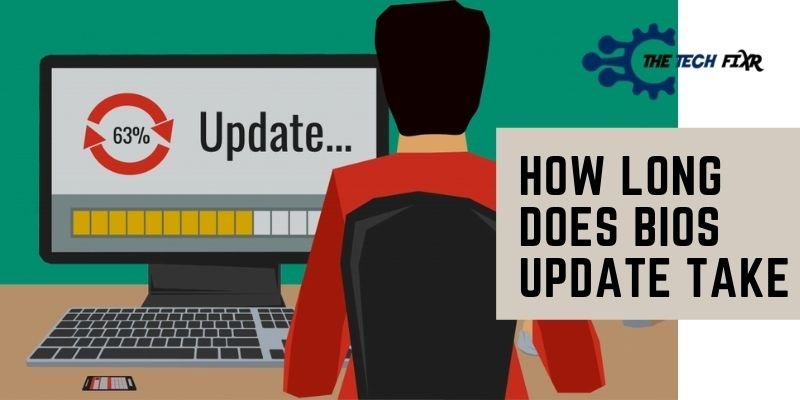 How long does bios update take for a computer? It should not be more than 10 minutes on average. Do you think it is taking too long on yours?

The BIOS (Basic Input/ Output System) is a built-in core processor software that helps your computer to initialize the processes during the booting process. BIOS might need to update like the other applications, which can take from a minute to hours. And while it is taking too long, it is a matter to worry about.

But will it take the same amount of time for every computer? In this article, we have combined the top 5 models and discussed the standard BIOS updating time for each.

How Long Does BIOS Update Take: A to Z of BIOS Updating Time

The BIOS size range is currently considered from 16 to 32 MB, and the updates typically take 10 seconds each MB or less. So, with an average approximation, the total updating time is assumed from 2 to 4 minutes.

While the BIOS update is taking hours, there might have been some vital issues about the new setups. Experts suggest not to update BIOS until there is any significant improvement on the latest version.

Again, if the updating takes over 5 minutes, it is suggested to wait at least 10 to 15 minutes by different brands and experts. However, this time is considered higher with various brands as well. In this part, we will discuss this updating time for Windows 10 Dell, MSI, Lenovo, HP, and ASUS. To avoid misconceptions, please keep reading and don’t miss a part.

How Long Does a Bios Update Take Windows 10 Dell

BIOS Dell normally takes 90 minutes or less on average. But when the old version is slowed down, it might take longer.

For the Windows version released in May 2020, the download and update take a few minutes. But if you do not have this version, with an older one, BIOS dell laptop or pc can take from 20 to 30 minutes or longer than an hour.

MSI users face the BIOS update taking 2 to 12 hours which is insane. The updates, in general, takes just a couple of minutes that is also claimed by the originals while it is taking forever. But many of the users faced the issue while updating to MSI Live Update 6.

In this case, it is better to unplug the power supplies and wait to reboot. This should not take more than around half an hour. If it does, we have a solution for you. So, wait till the end.

The Lenovo community shows their BIOS update timing with each action done into two sections. They take time as per the following,

The HP laptop and pc users claimed some common BIOS updating struggles over different communities and discussion forums. The issues start with the lack of installing capabilities to Windows 10 while the system asks for a BIOS update. While the updating process is applied, it takes minutes to show 100%, but the progress frizzes.

At his point, the system warns no to turn off or take out external power supplies off the computer or laptop. The HP official suggests a method to recover from this specific issue, which takes a few more minutes to recover. So on average, HP takes 20 to 30 minutes of BIOS update with 3 to 5 minutes of start-up.

You may feel like your ASUS bios update taking forever. Well, it typically takes 2 to 3 minutes, but the older version can take quite long.

The longest duration for ASUS laptops and pcs is considered around 30 minutes. But if you are using running an older version of Windows (Lower than Windows 10 and Windows 8) and if your system applications are old and slowed down, it is normal to take from an hour to 90 minutes.

What to Do If Bios Update Takes Too Long

If the BIOS update is taking too long, there is a remedy that you might like to apply. But don’t freak out because the process is called “Press and Prey”. Have a look,

These actions should result in activating the monitor, mouse, and keyboard.

There should be options on whether to update or cancel. At this point, the system should continue booting within 20 to 30 seconds. If not, then simply cancel the update. If you are lucky enough, then your laptop or pc will be recovered to its normal state.

How do I know if my computer BIOS update was successful?

The success of the update will be displayed on the corner of your device monitor. There should be a company logo.

How long should BIOS take?

BIOS update takes at least 2 minutes to complete, but it can take hours to recover depending on different complications.

What happens after updating BIOS?

BIOS update is not entirely visible as any other software or application update. It shortly fixes the bugs or adds new supports to your computer.

If you have gone through the entire content, then at this point, you surely know that there are several cases that define how long does bios update take for different brands and models of computer and laptop. So, have you got the answer for yours?

Experts and brand originals always suggest not to BIOS update until your computer is badly requiring it. BIOS is the most sensitive part of your device that can crash for tiny overlooks. If you have an older version of your device, the updating might take ages to complete. So, please try to avoid it for the betterment of your device.