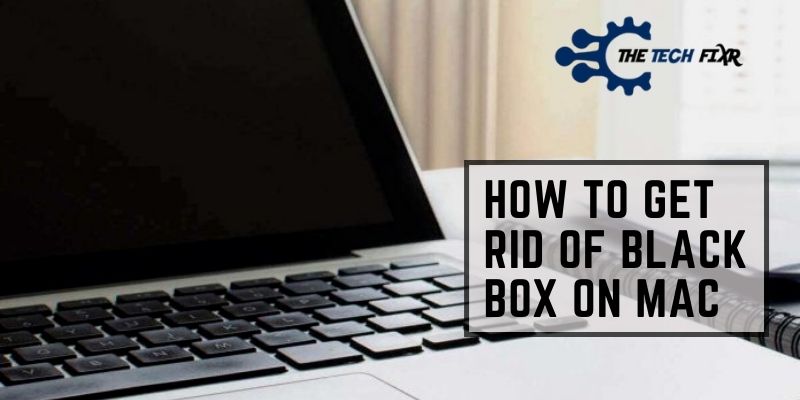 Are you a newcomer to the Macbook World? Are you facing an annoying problem like how to get rid of black box on Mac? Check that the voice-over option is enabled by you accidentally that you didn’t know and it makes the black box appear before you. But there can be another reason also.

Experiencing this kind of matter is arguably disgusting. No worries about it if so happens to you.

After today’s discussion, we assure you will be aware of how to remove black box on Mac. Also, you will get to know what is the black box on the Mac, why it could appear, and how to stop it.

So. keep reading the entire concept and apply recommended tricks based on your problem. Because we will place all the probable reasons for the coming black box on the screen.

Table Of Contents show
1 What Is the Black Box on My Mac?
2 How to Get Rid of Black Box on Mac-Reasons with Fixes
2.1 Turning Off Universal Access
2.2 Turning Off VoiceOver Option
3 Some Additional Issues If you have a Mac Book Pro
4 Frequently Asked Questions (FAQs)
4.1 Why is my Mac telling me everything I am doing?
4.2 Why is there a black rectangle on my Mac screen?
4.3 Why is there a small square on my Mac screen?
5 Final Verdict
5.1 You Can Also Read:

What Is the Black Box on My Mac?

Sometimes, you may notice that a dialogue box appears and what you are typing or doing on your screen, it will say all the things with that black box. So it looks like a black text box on Mac screen.

Every letter will be repeated after your typing. Sometimes it happens for a specific reason. There is an option named Universal Access, and if the option turns on, it appears like a rectangle on Mac screen every time when you command.

However, you can solve it very quickly. We will show the solving way below.

Before that, get some ideas for this type of preview of the screen, like zoom in.

Now get into the main queries and get rid of the black box appearing on the Mac screen.

At first, look at the table, what could be the reason to appear the black box on Mac and how to remove it.

Let’s know in detail. We divide the solution into two portions, although it is part of the same procedure.

When you intend to stop Universal  Access, you have to follow the steps below. At first, check out the function named System Preference. If it is on your Macbook, then it is okay. But, if that is not on it, then launch it.

Then scroll down and look for Universal Access > click it when you find > Scroll down to find out an option named VoiceOver > click it and turn it off.

This is the way to stop previewing the black text box on mac screen.

There is no more individual option to stop the VoiceOver function. The only to go from system preference > Universal Access> VoiceOver > turn off.

However, you can do it only by pressing a command. It will work for the system preference, universal Access, and VoiceOver command.

To do so, press Command + F5. You need not add + icon while you are commanding. Just command the F5 button as like you do another activity. And it will work for stoping the whole accessories.

Though it is not much tricky when you do not know a simple thing, it seems to you like a hassle. You can practice it to solve the problem.

However, you may think you did not Turn on the VoiceOver command, but it can happen because of some updating and technical issues.

Some Additional Issues If you have a Mac Book Pro

If you have a Mac book Pro and face this kind of problem, you can solve it easily. But if you see your Mac Pro is not turning On, check the brightness first because it can be on but seems off because of screen brightness.

Moreover, If you see your screen is totally black, try to reset your NVRAM.

To do so, Press together Shift+ control+ Option+ power. Press all the buttons together, and wait for 12 seconds. Then release them together. It will work for the issues.

So these are how you can solve your Mac black screen issue.

Why is my Mac telling me everything I am doing?

Mac has an advanced feature that tells the user what they are doing. It is designed to help those who have difficulty seeing the screen, so Apple added a feature named ‘VoiceOver.’ That is the probable reason for telling you loudly everything you are doing on your Mac. No matter if you face irritation, you can stop it.

Why is there a black rectangle on my Mac screen?

As I said before, Apple had added a feature that tells everything you are doing at a certain time. When you see a black rectangular shape box appear on your objects, you can identify it as a ‘VoiceOver Cursor.’ Otherwise, you can check the accessibility of Universal Access preference. Then you can take a measured step to stop the box on the screen.

Why is there a small square on my Mac screen?

If you see a small but white square appearing on your screen and whatever you open, you can see it, make sure it is not for the universal Access preference.  It might be for another reason.
Probably it is because of being your MBP in the warranty period. So you should bring it to an Apple Store genius bar and let it fix. That is how you can solve it.

From the above discussion, if you apply the trick, you will find your answer for how to get rid of black box on Mac.

Then, when you have a normal Macbook, try to find out why the black rectangular shape box is and fall back on the probable solutions.

On the other hand, when you have a Mac pro, try to short out the problem based on the anticipated reasons.

We hope if you have read all the context with total concentration, you will get the possible accomplishments to solve your problem easily and make your Mac journey very smooth and hassle-free.