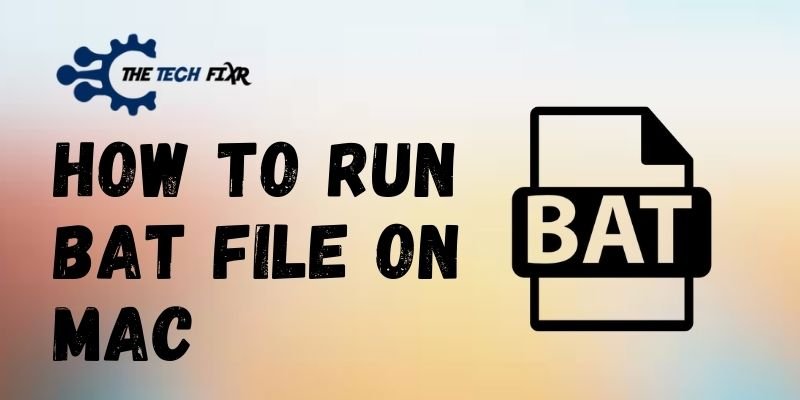 If you are a new converter from Microsoft Windows to Mac and face trouble with how to run bat file on Mac? Though bat file is a Windows script type of file, you can run it on MAC using the command lines.

You see, bat files are full of a series of commands to be executed. So, if you are facing difficulty running your bat file on a mac, read the whole article with full concentration.

In this article, you will know what a bat file is, how to execute it on MAC, and the steps, all the pros, and cons as well.

Table Of Contents show
1 What is a Run BAT File?
2 5 Practical Methods on How to Run Bat File on Mac
2.1 Method-1: Change the File Name
2.2 Method-2: Rewrite the Terminal Path Name
2.3 Method-3: Run from the Terminal
2.4 Method-4: Converting the Bat File Using MAC System Emulator
2.5 Method-5: Using Crossover for MAC
3 Frequently Asked Questions
3.1 Does the BAT file work on Mac?
3.2 What is the Mac equivalent of a bat file?
3.3 How do you edit a BAT file on a Mac?
4 Conclusion
4.1 You Can Also Read:

What is a Run BAT File?

As you know, a bat file is not accessible on Mac-like other programs on other operating systems. So you will have to know first what is a run bat file and how to make a bat file work on Mac.

For example, when using a batch file, you cannot open or run it like other files. So, when a bash file is run, the shell program reads the file and performs its commands line-by-lines.

This bat file or batch file is also known as a script file where you can series of commands of some Computer language along with some conditional loop such as IF, OR, FOR that any programmers might be acquainted with.

To identify a batch file, check the file name extension as .bat (for Windows) or .cmd ( for Windows NT)

But if you want to know the process of running this type of file on MAC, you have to make your MAC able to read the commands line by line or convert the commands to run on MAC.

Let’s see how you can do that.

5 Practical Methods on How to Run Bat File on Mac

There are different ways available to run bat files from the command line. I will describe all of the ways serially. But, before that, I’ll mention changing permission to run a bat file on Mac.

To proceed with the procedure, you must put all the commands in a plain text document and save it with a name.

However, first, edit your batch files permissions so that they will be executable. To change the permission, right-click on it.

Then > show info> Change the permission. That is how you can change the file’s permission.

Another way is to change permission is as follows. First, go into the terminal of the file, then enter a command called chmod 755 batch script. It will change the permission.

Then specify the full path by typing

To tell the terminal to look for a particular file, just type “./” before that filename. After that you can find your bat file working on MAC.

When you face a bash error, you may try this step to get rid of it.

In this case, go to the folder and type:

Be careful to use punctuation. In another sense, you can write the full path startup.sh and if it doesn’t work, check the startup.sh execute permissions. Then you can change the permission and operate your file.

This is the way how to run a script on Mac.

Method-3: Run from the Terminal

Till now, I was talking about typing something to run your bat files. But now I would like to present the easiest way.

You can use it only by drag and drop. So you do not need to write a startup.sh, instead, you just drag it from the finder and drop it to the terminal window. Then press return.

To stop running, just type or drag from here shutdown.sh.

If it Does Not Work Then,

You can convert Bat to Mac in another way that is using an emulator called WineHq.

After installing this on your system, you can run your Bat scripts or any other Windows file on MAC via a series of commands. The commands are like $ wine cmd /c MyScript.bat

If you follow the command, you will successfully run your bat file on your Mac and enhance the journey of the Mac.

If you have any Crossover for Mac, start your Crossover.

If it’s not running, go > Menu Bar > Programs> Run Commands> Then select whatever you want to install > click browse > look for your BAT file> Click Run.

However, there is another way to run a bat file on mac is converting the bat file into a Bash Script file using Python language codes.

So, if you don’t have the knowledge you might not be able to do that. Besides, you need the Squishserver available on your Mac too.

Does the BAT file work on Mac?

To be honest, a bat file does not work on Mac. As you know, the batch is known as a bat file, so you can write or edit the batch file in a notepad or try some tactics to9 make it run. Basically, the batch file is not for Mac, and it’s for Windows OS.

What is the Mac equivalent of a bat file?

As I previously mentioned, the bat file is a batch file for a Mac. So I can easily say the Mac equivalent of a bat is a bash script undeniably. There is no doubt.

How do you edit a BAT file on a Mac?

If you want to edit your bat file, and your Mac is running OS X Yosemite, the simple way will be like- select the file’s group or file that you want to rename. Then click the right button and select the ‘ select X item’ from the drop-down menu. Then a new batch renaming menu will pop up.

After all the discussions,I firmly believe that you may be able to understand right now how to run bat file on Mac. Unfortunately, though, It is pretty confusing for those who are not Mac users, instead of windows users; they will face hassle to operate a particular function.

Thus, This article may be capable of making conclusions to know a particular matter, running a batch file using  Mac as a new journey.

Basically, you have to command some language to perform any task in Mac that is not MAC supported.  You can use a different bash script to run your bat file.  There is the fact initially. Nothing else, but when you will be used to in using Mac, you will find an excellent outcome. Happy journey.

Do you have any idea how long does a dell laptop battery last? According to Dell, a Dell laptop’s battery can last for 2 to 4 years easily. But this timing can go under reduction depending on...

Are you inquiring about what to do after cloning the hard drive to SSD? Suppose you successfully cloned the HDD to SSD, but now you’ve no idea what to do next. You notice on the disk management HDD...