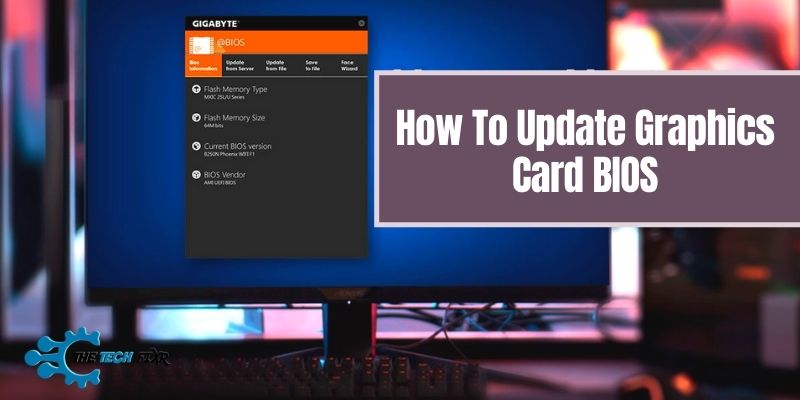 The steps of how to update graphics card BIOS are easy to apply.

Updating the BIOS follows the same principles for different graphics cards from different manufactures. What you need is the latest version from the respective manufacturer’s website. Or you can get them from third-party websites as well.

The Nvidia and AMD GPUs need specific tools for updating their BIOS. Likewise, EVGA graphics cards can be updated using a formatted USB drive. Compared to them, ASUS has streamlined the updating process to a simple and easily applicable one.

Allow us to describe how you can successfully update the BIOS of the GPU cards.

How To Update Graphics Card BIOS

The process of updating graphics card BIOS starts with identifying the manufacturer. Then you can move on to other steps to complete the task of finding out the manufacturer if you are unsure. Please implement the following steps carefully:

Let’s talk about how do I update my graphics card BIOS from different manufacturers.

How To Update GPU BIOS NVidia

How To Update GPU BIOS AMD

The process of updating the BIOS of AMD GPU is exactly the same except you have to use the ATiWinflash.exe flashing tool.

How To Update GPU BIOS EVGA

There are 2 ways you can follow to update the BIOS of the EVGA GPU.

In this method, you need to follow the exact steps mentioned for Nvidia or AMD GPU until you get to the step of formating the bootable USB drive.

Asus has streamlined the process of updating the BIOS of the GPU.

Job done. The BIOS of your ASUS graphics card is updated now.

How do I check my GPU BIOS?

Using the Windows Key, you can go to the Display Settings and Advanced Display Settings. There will be a window at the bottom. The details of the BIOS version will be in the middle of that window.

Do I need to update my graphics card BIOS?

The answer is, it depends. Like the saying – if it ain’t broke, don’t fix it. The same goes here. If you don’t feel the need to change anything and are happy with the performance you are getting from the system, You don’t really need to update your graphics card BIOS.

No, BIOS won’t always affect graphics cards. The only issue may be the untreated bugs in the system that can hamper the performance of the GPU cards.

Can you update BIOS without display?

The simple answer is you can’t update the BIOS without the display. You can do it, but it will be extremely difficult and absolutely isn’t worth the hassle.

Is it safe to update BIOS?

Yes, it is indeed safe to update the BIOS, as long as you follow the right procedure and apply them carefully.

As you have seen, the steps for how to update graphics card BIOS should be implemented carefully to carry out the task successfully. But do we really need to update GPUs’ BIOS?

Updates are necessary for supporting new hardware and fixing known bugs. Now consider this info in the context of graphic-intensive programs of modern computers. So, it is obvious that keeping the GPU updated will optimize the performance of our computers.

It is important to remember that updating graphic card BIOS runs the risk of blocking the card itself. So, it is wise if you don’t do it unless you are having issues with the graphics card. Then again, if you follow the procedure carefully, you can be sure of enhanced performance.