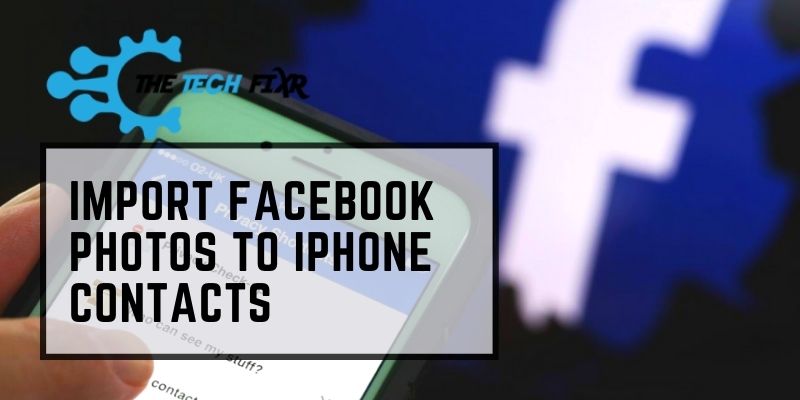 There are simple ways about how to sync Facebook profile pictures with iPhone contacts. You can continue the process with your phone settings or using some applications. To do this, you need to follow the steps we described here.

You can easily import Facebook photos to your iPhone contacts by using your iPhone device settings with some easy steps. The process is discussed below-

Step-4: Now tap on the setting icon on your phone screen. Go to the settings.

Step-5: Then scroll down on the screen and search for the options Facebook.

Step-9: Tap on the contact option and slide the toggle switch and turn it on.

Step-10: After you turned on the toggle switch, your Facebook contacts will be synced to your iPhone.

Step-11: Then tap on “Update All Contacts” and import your Facebook contacts to your iPhone.

The top two apps that iPhone users mostly used to sync their face contact, photo ad information, and other devices are Sync.ME, FaceSync. Here we are describing the process of the most popular apps to importing Facebook photos to your iPhone.

This Sync.ME application is the most used app in iPhone users that used to import contacts, photos, and other information from social media.

The process of importing Facebook photos using Sync.ME app is below

Step-1: First, go to the iPhone app store. Search the Sync.ME app and download it on your iPhone. Then install the app.

Step-3: On the application’s home screen, tap on the “Settings icon” that is located at the lower right corner of your phone screen.

Step-4: On the application Settings page, scroll down for the button labeled with “Sync Settings” and tap on it.

Step-5: On that page, search for the option “Information” and select it.

Step-6: Now choose the information you wanted to sync from your Facebook to your iPhone, like contacts and other information.

Step-7: After selecting the information you want to sync, scroll down and tap on the button “Done”.

Step-8: Now back to the home screen of the application. There is a giant sync button on the screen tap on it.

Step-9: A screen will appear asking what social network you would like to sync to your iPhone device. Select Facebook and then tap on the “Next” button. The sync will continue to progress.

Step-10: Once the syncing is complete, it will show all the contacts from your Facebook. Then the contacts will sync on the iPhone through the app.

Step-1: Download the FaceSync app from the app store of your phone and install it on your device.

Step-2: After completing installing the app, launch it on your device.

Step-3: When you are on the app’s home screen, scroll down to the bottom and search for the option “Sync”. Tap on Sync button that will lead you into the Sync section.

Step-4: There will be many options among them tap on “Sync with Facebook Friends”.

Now you can see the Facebook profile photo on your iPhone contacts.

Which App Is More Preferable?

Among the 2 apps mentioned above, the “Sync.Me” app will be more helpful. Also, it is available in the App store too.

Importing photos from your Facebook contact to your iPhone is a very tricky and time-consuming task. It will make it easy to attach photos to your iPhone contacts and save time. There is nothing to worry about; the process is very simple to do.  If you carefully read this article and understand every step, you can do it on your own.

Hey Myself Oliver! Welcome you all to TheTechFixr! Technology always seems passionate to me. From my childhood, these issues attract me to feel like a magnet to it. Gathering more knowledge about all these things was my hobby, and that fascinated hobby encourages me to build this platform. Although I became a doctor with the flow of time, this platform represents my dream imprint—this all about fixing tech issues.

link to Learn How To Uninstall Samsung Gallery Within 2 Minutes

Do you want to uninstall the gallery app from your Samsung handset? We would recommend not to do so. Yet, if you still want to disable or uninstall the Gallery, you can have a look at this easy...

Continue Reading
link to How To Clean System ROM In Android? - 2 Simple Ways

If your Android device behaves abnormally with you due to heavy system ROM, you have arrived in the right place. We know if system ROM fills up the device’s memory, the device may show “Do not...