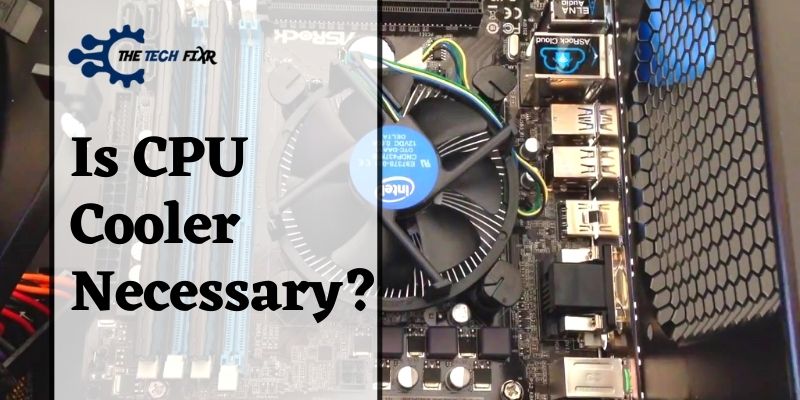 Is CPU cooler necessary? First, let us answer that question in no uncertain terms. CPU coolers are an absolute must for computers. But the cooler types and amounts vary in different cases.

When electrical charge passes over circuits and through the wires, it faces a degree of natural resistance. We can portray this resistance of the electrical charges by comparing them with rubbing our own hands with one another. And we know that the friction of two rubbing hands continuously will create heat.

But how does all that make us use CPU coolers?

Table Of Contents show
1 Is CPU Cooler Necessary?
2 How a CPU Cooler Works!
3 Types of CPU Cooler
4 Frequently Asked Questions (FAQs)
4.1 Do I need liquid cooling if I don’t overclock?
4.2 Do you need a CPU cooler for gaming?
4.3 What happens if I run a CPU without a cooler?
5 Final Words

This is a no-brainer, actually. Every hardware engineer worth their salt can attest to that question in no uncertain terms.

CPU cooling is indeed an integral part of PC building. And the CPU cooler is the primary tool to achieve that goal.

Complicated workloads like precision gaming can prompt the hardware producing excessive heat. Overheated components suffer the risk of physical damage. And the ensuing below-par performance of the overall system can be a tiresome issue if you are engaged in challenging tasks on a daily basis.

The CPU, the GPU, and other assorted integrated circuits are responsible for generating heat in a modern computer. It’s worth repeating that building up heat in component parts drives down a computer’s optimal performance.

There is also the risk of permanent physical damage to the sophisticated parts. These reasons prove the fact about how vital a CPU Cooler is.

A CPU cooler is the most effective way to cool computers. And it prevents all the unwanted consequences that overheating brings to a computer.

How a CPU Cooler Works!

The basic mechanism of a CPU cooler is pretty simple.

Most CPU coolers work using the above principle.

Air and liquid CPU coolers are the two variants that we mostly use for our desktop computers.

For laptops, air cooling is more appropriate because of their smaller chassis, and they are not also replaceable or upgradeable.

A liquid cooler or AIO (All-In-One) Cooler is an extended version of air CPU coolers. By that, we are saying that a liquid coolant is added with the air-cooling mechanism in liquid cooling.

Like an air cooler, the cooling begins with a baseplate connected with the cooler’s metal lid. A glue-like thermal paste holds the connection between the baseplate and the metal lid. This also ensures the transfer of the heat.

For liquid or AIO coolers, the baseplate is a part of the water block – this mechanism is the main difference between an air and a liquid CPU cooler.

Through a pipe, the coolant keeps moving inside the system and upwards to a radiator. While moving, the coolant absorbs heat.

When the liquid reaches the radiator, the liquid is exposed to air by the radiator. The air cools down the coolant, and the fans of the radiator blow away the heat. The liquid then goes back to the water block. And the cycle starts again.

Is liquid cooler necessary? To be crystal clear about it – it isn’t a must-have tool or mandatory cooling option for the vast majority of desktop users. An air CPU cooler can handle the amount of heat that your day-to-day computer operations can produce.

Is CPU Cooler necessary if not for overclocking?  Again, the truth is, without overclocking, an air CPU cooler or even a stock CPU cooler may even be enough to redistribute the heat away. But do you need overclocking on a daily basis to get the last bit of performance from your system? Then you must choose liquid cooling.

On the other hand, what about if you have a Ryzen 5 3600 processor? Is a Liquid CPU Cooler necessary for Ryzen 5 3600? In this case, you should opt for liquid coolers as they can produce a lot of heat, and as a result, CPUs get really hot.

Is a CPU cooler necessary for gaming? For gaming, CPU cooling is a must. Precision gaming requires a higher level of efficiency from the system. Overclocking, constant hammering of high-end GPUs, lengthy periods of complicated calculations, etc., induce the CPU creating a lot of heat.

Stock CPU coolers are not enough to enhance performance and to save the processor and other sophisticated components from getting fried.

So, you must have a cooler – and if you are a gaming enthusiast, you should get the liquid CPU cooler for your system.

Do I need liquid cooling if I don’t overclock?

The answer is no. If you don’t have to overclock to complete complicated tasks, an air cooler is capable of cooling your computer.

Do you need a CPU cooler for gaming?

Gaming would require the processor of your computer to perform at its peak. And for precision gaming, you will need a high-end GPU that can generate a substantial amount of heat. So, not a CPU cooler is a must for gaming, but we would suggest a liquid cooler if you are a pro-gamer.

What happens if I run a CPU without a cooler?

If you run a CPU even without a stock cooler, it takes less than a minute to get overheated. As a result, the chips might get burnt and damaged physically.

If the question ‘is a CPU cooler necessary’ was confusing to you, we sincerely hope now you know about their importance.

Heat is the byproduct of every computer function performed by component parts. And if we cannot manage this heat properly, it will affect the overall wellbeing and the performance of a computer system.

CPU coolers are the tools that we use to cool off the computers from damaging heat.

For our average, day-to-day computer functioning, an air CPU cooler is sufficient. But if you engage in overclocking or high precision gaming on a regular basis, liquid cooling should be the best option.