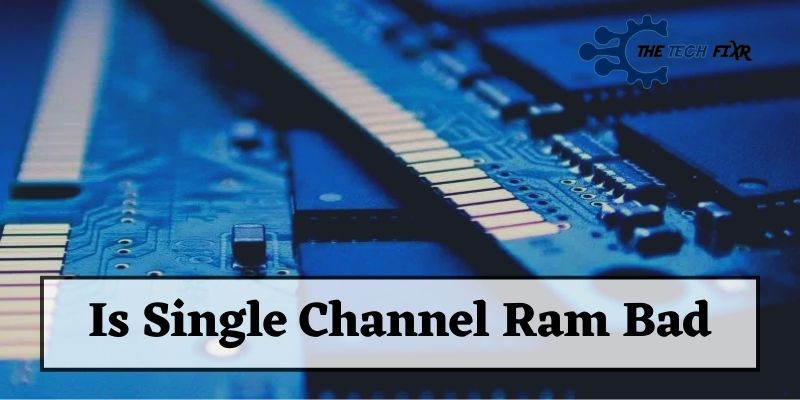 Is single channel RAM bad? The question is buzzing around as nowadays most prefer dual or quad channel memory. But a single channel ram is not bad at all though you face some slow performance.

Who is building a gaming PC is always concerned about the RAM. It is the RAM that helps the processor to achieve the maximum potential to perform. To know if the single channel RAM is good or bad for your PC, you have to know the type of RAM that gives the best performance and how it works.

If you wanna clear all your confusion about the single channel ram, we are here with you. So let’s have a look at the article for detailed information.

Is Single Channel Ram Bad: What You Should Know

What Is Single Channel RAM?

A single channel can operate on a 64-bit data channel. It indicates that the RAM can pass 64 bits of data at a time.

If your motherboard has a dual channel configuration and two slots of RAM, but you want to use a single stick ram, you can use it as a single-channel RAM. When you insert two RAMs in two slots, it will work as a dual channel.

On the other hand, while your computer has a single-channel configuration but two slots and inserts two RAM, it will work as a single channel.

In the carrying speed of data, there is not much difference between a single channel RAM and Dual channel RAM. A stick of single-channel ram of the similar capacity of two dual RAM channel sticks shows almost the same performance.

You will only find a significant difference in CPU usage. Between single and dual channel RAM, the single channel memory uses the CPU most. This happens because of the lower bandwidth of a single channel.

On the other hand, the dual channel RAM uses a CPU less than a single channel RAM because of extra bandwidth. It is almost 10-20% less compared to the single channel. But all of this can not make any noticeable differences for gaming PC.

Finally, we can say that a single channel RAM is not bad, but it shows a little slower performance that a common user can not notice.

There is a misunderstanding among the PC builders that the single channel RAM is not that good for use in a gaming PC; it slower the PC and hamper system performance.

But here, in this article, we explained how much a single channel is slow and how it works with the system. It is slower than a dual channel which is almost unnoticeable.

We tried our best to give you an overall idea about single channel RAM and clear all the misunderstandings about it.

Is It Better To Run Single Or Dual Channel RAM?

Of course, it is better to run a dual channel rather than a single channel. In a dual-channel, there is an increase in the number of RAM sticks. This makes the system of your PC faster. It also increases the contact between the RAM and the memory controller that improves the overall system performance