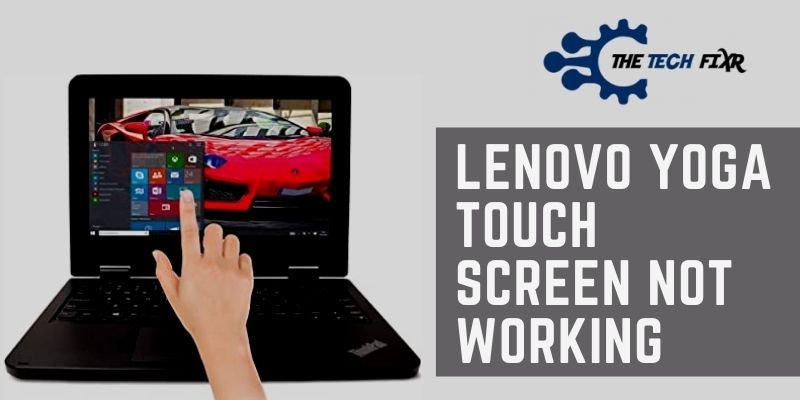 The Yogas, from Lenovo, act as high-functioning 2-in-1 hybrid computers – opening up the conception of transformable laptops. But like every other technical device, Lenovo Yoga models are not free from glitches. In this case, the Lenovo Yoga touch screen not working is the issue.

Since 2012, Lenovo has furnished 26 models of Yoga – versatile, user-friendly, and affordable. When you detach the screen from the keyboard, the yoga models become a notepad. So, if the touch screen stops working or starts causing problems – the whole idea of detachment seems worthless.

But you can fix the problem by yourself – unless it’s physically damaged or a faulty product. And the steps are useful for every other model of Yoga.

Below is a summary of the reasons that may cause problems and what you can do about them:

The possible reasons discussed above are a few of the basic problems you’re going to face in the Lenovo Yoga Touch Screen. Read on to find detailed solutions.

Please follow the below steps in the exact same order as they’re written:

When you get your Yoga device in this mode, the touch screen will hopefully start working smoothly again.

Sometimes disabling and then re-enabling your Yoga device’s HID touch screen driver is enough to fix the problem. Please follow the following instructions:

That’s it. It should get the issue sorted.

If the touch screen still doesn’t respond how it should, then you can update and reinstall the driver itself. Please follow the steps carefully:

You need to restart your device and check if the problem is solved.

If not, then go through the following steps:

Now your Yoga device has no HID-compliant touch screen driver. To get one, either you can go to support.lenovo.com, or you can use a third-party web tool to install the appropriate driver for your device. After reinstalling, restart the device and check if the problem is solved.

If that’s not the case, then follow the below steps for the final task with the touch screen driver:

This complete overhauling of the touch screen driver should erase the problem.

In simple English, the database comprises information regarding settings, options, and installed software or hardware, known as registry keys or Windows registries. Your Yoga device may not be working properly if the registry keys of your device get corrupted.

Microsoft’s System File Checker can repair the corrupted registry keys. There are other third-party tools also available and can do the job as well.

An SFC scan will replace all the corrupted files, and the touch screen should start working properly.

Latest Update Of the Windows

Your device should run on the latest OS. A bug, from Windows 10, may create touch screen issues. If that’s the case, updating will solve the problem.

Updating Windows is easy.  In the search panel, write “update,” and you will have access to the latest updates.  Windows will suggest it if you are in need of updating.

Windows usually provide a troubleshooting function to eliminate most of the technical glitches. More often than not, troubleshooting can resolve Yoga models’ touch screens not working issues.

Restart your Yoga, and hopefully, the problem won’t be there anymore.

Holding The power Button For 1 Minute

As strange as it may seem, many Yoga users worldwide have talked on various internet forums about this unusual method. And Lenovo even made it official by including it in their official support forums.

First, shut down your computer. After a few seconds, unplug the power cable. Then just hold the power button for a minute straight. Start off the device again, and your touch screen issue may be gone for good.

We believe by now you understand the complication of the process mentioned above. And you’re ready to try one by one – until the problem of your Lenovo Yoga touch screen not working is solved permanently.

But if those don’t provide successful results, visit the official support system and let them have a look.

Thank you for reading.