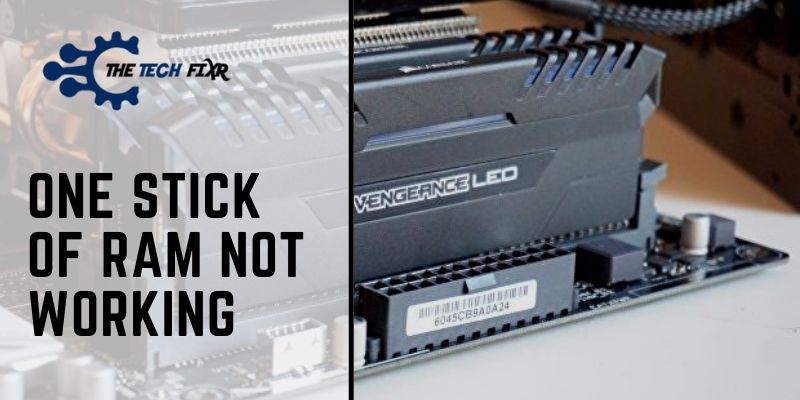 Many of us may face the issue of one stick of RAM not working from time to time. It can be due to different module RAM, or the RAM is not installed correctly. But some other reasons can be standing behind too.

Well, after our in-depth research, we have found out what can be the possible reasons and how to resolve.

Now, let’s get to know why one stick of RAM does not work and possible solutions for the situation.

Table Of Contents show
1 Reasons Why One Stick Of RAM Not Working
1.1 Faulty Installation
1.2 Incompatible Motherboard
1.3 Dust Residue
1.4 Physical Damages
2 How to Fix When Only One Stick Of Ram Recognized
2.1 Ensure Proper Installation of Rams
2.2 Check Motherboard Compatibility with the RAM
2.3 Clean The Memory Sticks
2.4 Test The memory Sticks With Other Systems
2.5 Check for Hardware Malfunctions
2.6 Reboot into Safe Mode
2.7 Turn The Auto Repair System Off
2.8 Clear Cache From The Memory Sticks:
3 Frequently Asked Questions (FAQs)
3.1 Why is one of my RAM sticks isn’t working?
3.2 Does 1 stick of RAM work?
3.3 What happens if RAM fails?
4 Final Words

Reasons Why One Stick Of  RAM Not Working

Usually, we don’t have to face many problems with the memory sticks as they are fixed in their slots. This is also the reason they undergo fewer diagnostics.

Let’s see some of the reasons that may cause 2 RAM sticks not working together:

Let’s digest so,e of the reasons in detail. If you are in a hurry can jump over the solution section directly.

Installing the memory sticks in their slots is easy enough. First, fold both of the clips of the RAM slot and lodge the stick unwaveringly into them. And we can insert them only one way in the slots.

But if the RAM does not stick to its slot tightly, the RAMs won’t be working. Let’s say, you have installed one properly but the other one is not firmly seated, then one stick of RAM won’t be recognized.

The manufacturers supply standard-issue memory sticks that we can insert and use both in our desktops and laptops.  We can’t interchange desktop RAMs with laptop RAMs or the other way around.

Sometimes it can also happen that the motherboard’s capacity is not on par with the RAM DIMM’s capacity.

Also, a motherboard has an upper limit for the maximum amount of memory. We can exploit this limit by using as little as two memory sticks or as much as eight. Let’s say, a motherboard’s maximum capacity for RAMs is 8GB and each slot can use a maximum of 2GB on each slot. So, using a memory stick higher than 2GB or a total of more than 8GB will not work.

All the above reasons can render both or one stick of RAM not working.

There can be dust deposited in the contacts of DIMM. Some other forms of tiny objects can also obstruct the connection between motherboards and RAMs. That can cause both or only one stick of RAM not working in your system.

For many reasons, there can be a power surge in the electricity supply. Power surges cause electrostatic discharge. This can damage the sophisticated components of the computer, including the memory sticks.

Excessive heat can be produced if the power supply unit cannot extinguish heat or airflow channels are blocked. Overclocking any part of the computer can also create excessive heat, which in turn, can physically damage components including RAMs.

How to Fix When Only One Stick Of Ram Recognized

Let’s try the physical fixes first to get one stick of RAM recognized and running.

As we have mentioned earlier, incorrectly installed RAMs will not work in your system. To rectify this possibility, release each memory stick and then reattach one by one.

While you do it, snap the RAMs back down to the DIMM strongly and listen carefully for the ‘click’ sound. The sound will ensure the sticks are slotted properly.

Now check if each of the RAM sticks is recognized.

Check Motherboard Compatibility with the RAM

You have to make sure that you are not using a desktop version of RAM on your laptop. Because doing that will render your Laptop RAM slot not working. Then you should check if you are using the appropriate memory sticks – like you haven’t inserted DDR3 RAM when your motherboard is DDR4 compatible. Even older versions of the same model can cause problems.

Checking the memory capacity of the motherboard is also important.

All the above tests can clear the compatibility issue. Now all you need to do is use the appropriate memory sticks that the motherboard can support.

Hopefully, this will get one memory stick recognized.

Most cleaning products for computer components are some version of Isopropyl Alcohol. The 91% solution usually works best as they evaporate real quick. Dip a simple cotton swab into the solution and swipe each DIMM contact.

Check each contact dust residue. If you can get an air compressor, use it to blast each side of the DIMM.

Now re-attach the sticks and check.

Test The memory Sticks With Other Systems

Sometimes the RAM memory sticks can be a part of a faulty batch or the plastic tabs or metallic parts on the edge can be broken while being inserted. A power surge or overheating can also make them unusable.

To be sure about the above cases, try to get another system with a similar configuration. Remove the sticks from your computer and attach them to the other system. Now check if the sticks run.

If they are faulty or damaged physically, they won’t be recognized there either.

In this case, you have no option but to buy a new one.

When you have done each and every one of the above but still one of the sticks of RAMs not working, consider the following software approaches:

Run each RAM on the OS separately and then both together. It will single out the faulty one. You have to get a new one if you want your system fast.

To run the OS on safe mode, do the following:

If you can boot the system into safe mode, this usually means there is no compatibility issue between the motherboard and the memory sticks.

So, to fix the issue, go to the official site of your RAM manufacturer and download the driver.

Hopefully installing the driver will get both of the memory sticks running.

Turn The Auto Repair System Off

You have to restart first. Then follow the steps carefully:

This will disable the Auto-repair mode.

Hopefully, this makes both of the memory sticks recognized and running.

Clear Cache From The Memory Sticks:

Go to the Run option from Windows Key and type the following command:

Why is one of my RAM sticks isn’t working?

There can be a few reasons for that. Physical damages, not compatible with the system, obsolete drivers, etc can render one RAM or both not working. Sometimes it can also happen that the RAM slot not working after cleaning it forcefully.

Does 1 stick of RAM work?

Yes, one stick of RAM can work perfectly for your system. We use more than one RAM stick to make the system run fast. As we have discussed earlier, RAM is more like the file folder for our running project. The more necessary info the folder contains, the faster it can be to complete the project.

What happens if RAM fails?

When the RAMs fail, many things can happen. The system won’t run smoothly and it will crash a number of times. The Graphics Card won’t be loading and often the system will freeze in the middle of a task. Failure of a Ram can leave important files corrupted.

Using more than one memory stick can make our system perform optimally. But when we are stuck with one stick of RAM not working, it is indeed frustrating.

But there are a few ways with which you can check and fix the issue. We have discussed them above with as much clarity as we can muster. And we hope you can apply them without much difficulty. It is possible that implementing them can solve the problem for you.

So, our suggestions would be to apply them first before you think of purchasing a new memory stick of RAM.