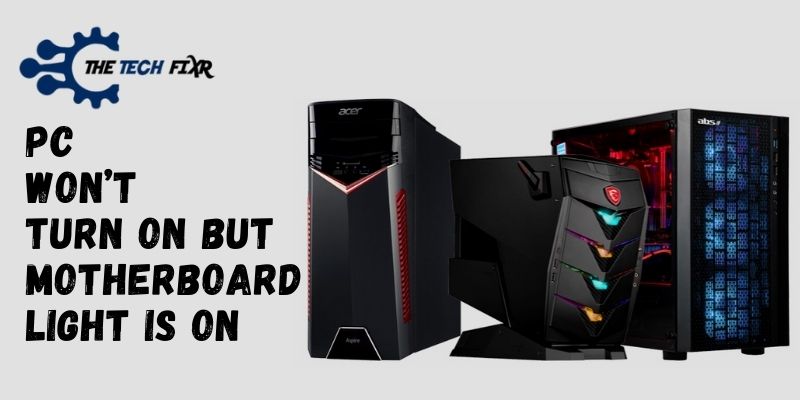 Do you see that your PC won’t turn on but motherboard light is on? It may happen for the malfunctioning of the main power supply or the bad motherboard. So, before thinking your computer is dead, look at the complete guide to overcome this issue that we have shown here.

It is frustrating when you see the motherboard light is on, but the PC is not responding. But it needs not to worry because we come up with the proper guidance only for you.

Sometimes for an improper memory system or insufficient voltage supply can cause this problem too.

Not sure about the actual cause? Let’s clarify the reasons and possible fixing.

Table Of Contents show
1 PC Won’t Turn on But Motherboard Light Is On: Possible Reasons
1.1 Problem with PSU
1.2 Problem with Fan
1.3 Any Faulty Fuse
2 How Can You Fix the Issue?
2.1 Check for Any IC Fuse
2.2 Check PC Power Button
2.3 Test the CMOS Battery
2.4 Reseat the Memories
2.5 New GPU Might Be Causing the Issue
2.6 Corrupted Files in PC
3 Frequently Asked Questions (FAQs)
3.1 Will a computer turn on with a bad motherboard?
3.2 Why is my motherboard light on?
3.3 How do I know if my power supply or motherboard is bad?
4 Final Words
4.1 You Can Also Read:

PC Won’t Turn on But Motherboard Light Is On: Possible Reasons

You can think your computer is dead after having the green light on motherboard but computer won’t turn on.

Can you guess what can be the actual cause behind this? Why doesn’t my computer turn on? As it is not a significant problem, some simple steps can fix it.

When the motherboard’s light is on, the computer won’t turn on it can be the PSU (Power supply unit) problem.

But if your computer not turning on power supply ok. Sometimes, the spinning fan or attempted to be spin also causes this problem.

A faulty fuse can be another reason for not turning on your PC. Moreover, the extra or unnecessary cables of the CDROM drive may restrict the turn-on process of your computer.

But if you see the screen gets black color, it might be a graphics card issue. Even if the pc won’t boot for a long time can cause this problem too.

The last but not the slightest reason can be the PC power button is the culprit that we are searching everywhere.

In that case, either bypass the power button or replace it with a new one.

How Can You Fix the Issue?

Well, to fix the problem, it is necessary to know the possible reasons that you get earlier. Right?

However, before making any significant replacement, it will be better to check all the connections associated with the computer.

Check for Any IC Fuse

First, check the PSU if there is any burning smell coming out. If yes, just find out the blown ICs and replace them with a new one.

Then reconnect the cables properly and remove the unnecessary lines like the CDROM drive.

Check the power button of the PC if it is working correctly or bypass it. You can also find out why power button not working PC and all the fixes for this too.

After that, check the CMOS battery. If you find it faulty try to replace the battery with a new one.

Otherwise, remove it for a while, like 30 minutes, and reseat it again.

Try to fix the incompatible or faulty memory. Sometimes any bad memory in a PC can cause the PC not to turn on.

If still no response, check the RAM,. If you find the Motherboard lights on but PC not booting, then try to boot it up after reseating the RAM.

If your computer doesn’t boot, it may need to module the RAM, CPU in a single slot. At the same time, apply the cooling facility.

Did you just install a new GPU? Have a look over the GPU. Perhaps pc doesn’t turn on because of the graphics card. Try to turn on the PC without GPU.

If it turns on, then the fault was with the GPU. Replace it.

Sometimes, any corrupted files or faulty driver loaders can cause this type of issue also.

Still, you can’t turn on the PC with the unfaulty motherboard after fixing it? It undoubtedly needs a new system boot.

Will a computer turn on with a bad motherboard?

Why is my motherboard light on?

The motherboard’s light indicates the inner hardware that appropriately gets the power or fails to work correctly. You can find that the motherboard lights up but has no display. That is, the pc won’t turn on but has power. Then it is necessary to recognize the failed system and have to fix it for running the computer.

How do I know if my power supply or motherboard is bad?

Answer: There are several signs to recognize the lousy motherboard or the improper power supply. Your computer won’t turn on after several attempts. Then it may crash sometime. Again, it can happen computer not turning on  but power supply is ok due to a faulty motherboard.
You can see the crashed screen or any pip sound coming from the inside. At the same time, the other parts of the computer like the fan, drive, memory may fail. Even fans may stop spinning because of the interrupted power supply or bad motherboard.

PC won’t turn on but motherboard light is on! Perhaps you already got the solution to fix the problem with the possible reasons mentioned above.

However, it is very usual to be sad when you find your seven-year-old computer dead now. So before approaching the costly fixing to an expert, it is better to check with the cheapest one.

Nevertheless, you can now fix your problem yourself when the motherboard standby light is on but has no power quickly by this guide.

Even when your friend will say, oh! my computer won’t turn on, it will be effortless for you to help him. Is not it?