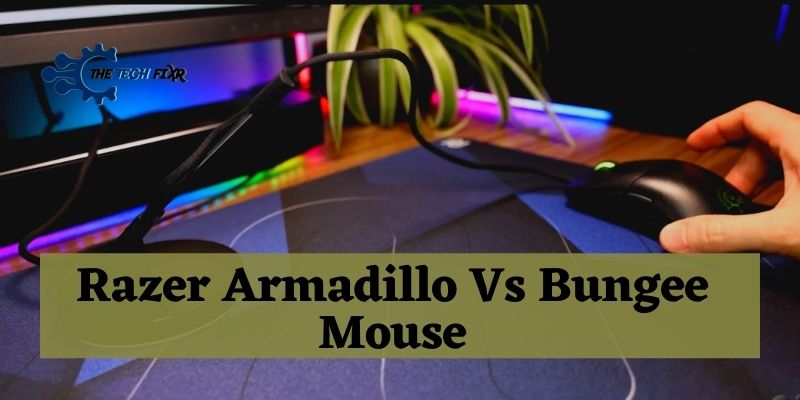 What is the difference between Razer Armadillo and Bungee? Armadillo comes in a compact size with easy setup comparing to Razer Bungee. Still, Bungee holds some place value.

However, to continue the constant gaming, you can use the Razer Armadillo or the Razer Bungee for mouse cable comfort. Indeed, these gadgets will improve your overall experience and performance of the game.

These gadgets will help you to play games constantly by reducing unnecessary movements. But Razer Armadillo vs Bungee – Which will be a better option?

Let’s figure out that through our discussion below.

Table Of Contents show
1 Razer Armadillo Vs Bungee Table Comparision
2 Differences Between Razer Armadillo Vs Razer Bungee
2.1 Comparing the Design
2.2 Slight Contrast in Height
2.3 Noticeable Difference in Arms
2.4 Similarities Between Razer Armadillo and Bungee
2.5 Smooth Surface Design
2.6 Weight Features the Same
2.7 Both Are Ideal as Gaming Mouse Setup
2.8 What about User Preferences
3 Frequently Asked Questions (FAQs)
3.1 Is the Razer Bungee Good?
3.2 Should I Use Mouse Bungee?
3.3 What Does the Razer Mouse Bungee Do?
4 What Will You Choose for Your Gaming Assistant?

The Razer Armadillo and Bungee – Both are used for preventing the unwanted movement of the mouse. Most importantly, when the mouse includes an extended wire, one of these gadgets is crucial.

If we consider close observation, there are no major differences between the Razer Armadillo and Bungee.

It is only the exterior design and user comfortability that differentiates the mouse management system from each other.

The height of the Razer Bungee is longer than the Razer Armadillo.

So, if you have a long-wired mouse, you should use the Razer Bungee. Conversely, when the wire of the mouse isn’t so long, The Razer Armadillo is the right choice to use.

The Razer bungee has two rust-resistant spring arms. The arms are used to hold the wires of the mouse.

But the Razer armadillo has no arms. Instead, the Armadillo has a hole in the middle that takes the mouse wire into it. Consequently, your mouse cannot move unnecessarily.

Similarities Between Razer Armadillo and Bungee

Nearly all the features of the Razer armadillo are similar to the Armadillo Bungee. Regardless of the look, you’ll get almost the same features and advantages from both of these gadgets.

So, what are the common features of the Razer armadillo and Bungee? Let’s see and compare them!

Both the Razer Armadillo and Bungee have a rubberized surface. The surface provides good traction and anti-slip performance after attaching the mouse cable.

Consequently, the Bungee and Armadillo remain stable even though your mouse moves aggressively.

Although the Razer armadillo is simple by look, it is fairly large and heavyweight. The razer Bungee is also a weighted product which makes it a great gadget for maximum stability.

Both Are Ideal as Gaming Mouse Setup

So, during intense gaming, the Bungee provides drag-free cable control to its users. Similar to the Bungee, the Armadillo also offers great control over the mouse after setting it up.

What about User Preferences

When you’re a hardcore and professional gamer, you don’t afford to miss a single moment of your game. Using a mouse becomes compulsory to play the game smoothly and flawlessly.

But, Due to the long wire, the mouse unnecessarily moves here and there. Consequently, it hampers your concentration. That’s why you need to use a mouse cable management system to maintain flawless playing.

The price of the Armadillo and Bungee is also indifferent to each other. A gamer who can afford the Armadillo can also buy the Bungee.

So, Mostly, you need to keep the mouse wire attached to the Bungee. Conversely, using the Armadillo is easy due to its simple construction. So, the heavy gamer mostly gives priority to the Armadillo over the Bungee.

Is the Razer Bungee Good?

The Razer Bungee is made of a large steel base. But, it has rubber feet underneath, so it becomes pretty bulky. Consequently, the Bungee prevents your mouse from snagging and dragging across the whole desk.
Indeed, the effectiveness makes the Razer Bungee a good choice for its users.

Should I Use Mouse Bungee?

If you’re a professional gamer and use the wired mouse to play, you must use the Mouse Bungee tool. The Mouse Bungee cable holder helps to improve your performance in the game, reducing the mouse’s unnecessary movement.

What Does the Razer Mouse Bungee Do?

The mouse Bungee attaches the mouse cable to an elevated spring arm. Consequently, the mouse reduces its unnecessary movement while you’re playing an important match. Thus, the mouse improves the gaming experience of the hardcore gamer.

What Will You Choose for Your Gaming Assistant?

If you’re a regular PC user, you don’t feel the importance of these gadgets so much. But, for the real-time gamer, having one of the Razer armadillo and Bungee is extremely important.

Lastly, it depends on the user which one you choose between the Razer Armadillo vs Bungee. As the price of these gadgets is also the same, you can buy any of these gaming gadgets.

But, remember, if you buy the Bungee, you must spend some time setting up the mouse at the beginning.