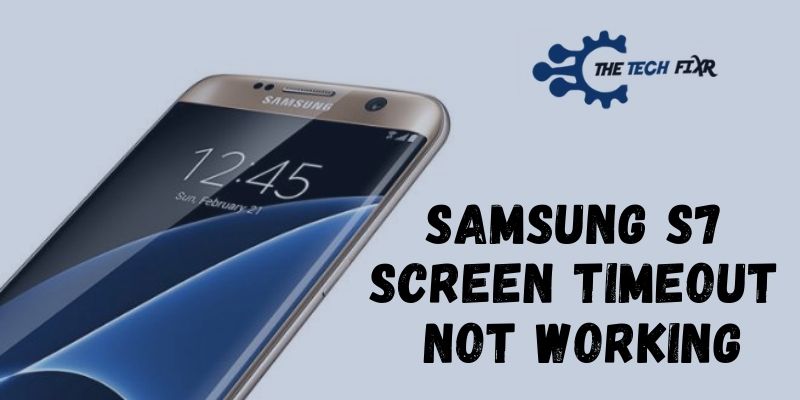 The Samsung Galaxy S7 is often considered one of the best androids of all time as it’s been a massive upgrade from its predecessor, the Galaxy S6.

And for a good reason, it offered one of the complete experiences in the entire lore of Samsung. But just like any other tech device, the Samsung S7 also comes with some issues.

Now, one of the most common issues its users face is the Samsung S7 screen timeout not working properly. And a majority of Samsung S7 users reported this problem.

This is an issue that risks our security of personal data as the screen doesn’t function timeout. But it’s not the end of the world as this issue has a solution too, just like every other tech.

Tot that concern, this article analyzes the causes of problems and possible solutions for this issue.

Samsung Galaxy S7 is one of the well-known devices among all the Samsung products. Even though this model has proved to be a standout, it has its burden to carry. And this timeout troubleshooting is one of them.

Let’s take a look at a table with the most common issues for Samsung S7 screen timeout not working and their fixes.

Problems Caused By the Screen Timeout Not working

When the screen timeout doesn’t work, it causes users a bunch of problems. This is why it gets frustrating for the users to face this issue repeatedly.

Some of these problems are:

Like all other modern devices, Samsung S7 has an option to set a timeout of the screen with a few options. You can select any time range from 10 seconds to 5 minutes to keep your screen timeout.

The problem is your battery keeps draining when the screen is constantly on. If this continues, it won’t be long before the battery gets damaged.

Another problem caused by the timeout failure is overheating due to staying awake for a long time. Phones get hot quickly when it’s kept turned on for too long.

And the longer the screen is on, the more dangerous it gets as the temperature rises too high.

Moreover, when the device gets too hot, it can cause corruption of files and data loss, which is too dangerous. And the worse part is that overheating can slow down the device that ultimately lowers its performance.

Apps Running in the Background

When your screen doesn’t timeout, the apps that you last used will keep running in the background. This drains the battery considerably fast and causes battery damage. Not just that, it also eats up the memory from your device.

This isn’t just harmful to the device’s ram only, but it’s also vicious to the battery’s health.

Sometimes we fall asleep while watching videos on our phones. For the timeout option, all the applications you were using will shut down in the background.

But when the screen timeout doesn’t work like the Samsung S7, the apps keep running in the background.

That means you keep getting notifications, app updates, and so on, which have sounds. This sound may wake you up anytime and cause interruption to your sleep.

Thus, these problems that are caused due to the screen timeout not working in Samsung Galaxy S7 bring a lot of risk and harm.

Hence, it’s essential to fix this problem. But before we get to the solution, what causes these problems? Let’s find out.

What Causes The Samsung S7 Screen Timeout to Not Work

There are some possible causes as to why Samsung repeatedly keeps the screen awake. Some of these causes are listed below.

Bug in Android and iOS

Your device may be injected with a bug in the operating system, which might be the reason why your phone is unable to timeout despite setting the time.

When you connect the charger in your Samsung S7, the screen glows up and doesn’t timeout, staying awake the whole time. This happens when there’s a bug in your device.

Daydream Feature is designed to keep your device awake. And there’s a daydream Feature (stay awake feature) in the Samsung Galaxy S7, which you might have left on unknowingly.

This might be another reason why your device stays awake all the time.

Sometimes the apps you download might not support your device. So when you download an app that doesn’t suit your device, it eats up space and battery along with memory which might make your Samsung S7 work up.

Some APK files or unregistered apps can cause the timeout not to work sometimes.

Glitch in the Device

Glitching is a common scenario in almost every smartphone. If your Samsung S7 has some bug, then it’s sure to glitch. Glitching can cause issues like timeout of the device, slowing down the device, etc.

It’s imperative to update your device continually, as the manufacturer keeps processing bugs and unwanted programs in each upgrade. So, keep your device updated always. This might be the reason why your Samsung S7 timeout doesn’t work.

Now that we’ve analyzed what issues it causes and why it happens. It’s time to find the solution. So to help you, here are some possible solutions for the Samsung S7 timeout not working.

Possible Solutions for the Screen Timeout Not working

There’s a bunch of ways to solve this issue. But to instantly get rid of the problem, you could follow the following steps.

To eliminate or get rid of the bug, first, you have to clear all the cache on the phone. Procedure to follow:

You might have accidentally turned on the stay awake feature, aka the daydream feature. As it keeps your device’s screen on, here is a way you can turn it off.

Sometimes, it might start to act up for not updating the device, and the timeout not working might be one of them. To prevent that, you can take the following steps.

Steps to Eliminate Glitch and bugs

If your Samsung S7 is acquired with some bugs, then it is bound to glitch. But for sensitive cases like this, just rebooting or restarting the device isn’t enough. Instead, it becomes frustrating.

To avoid that, it’s recommended to take an expert’s help and ask for guidelines to help you provide a permanent solution that will remove the bug.

That’s because if your device is equipped with some harmful files like viruses, meddling with it could ruin your Samsung S7. This is why it’s best to consult with expert technicians.

The Samsung S7 is still a great model to have to this day for its amazing features. And it shows excellent performance when it comes down to camera quality, unique design, and a great display.

But the Samsung S7 screen timeout not working properly is an issue that makes us think otherwise. That’s why we have put together this article to let you know that it’s super easy to fix this problem all by yourself.