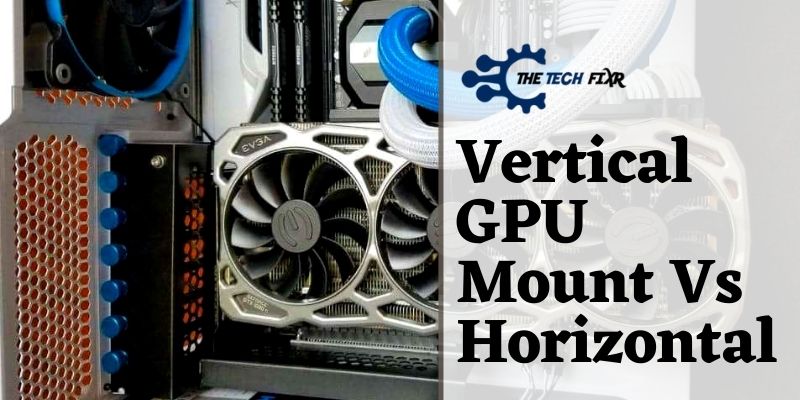 What is the difference between vertical GPU mount and horizontal GPU mount? Vertical installing exhibits the grandeur of the graphics card. Besides, parallel mounting increases the lifespan of the GPU. Some other facts are also high in the considering point list.

This is a razzle-dazzle of vertical GPU mount vs horizontal mount when building your PC.

Let’s not be perplexed rather, know the real gist of mounting the graphics card for looks and performance.

A Quick Comparison Between Vertical GPU Mount Vs Horizontal

Modern graphics card entails charming RGB lighting with slim fans. On vertical or horizontal GPU mounting, the look, installation, overclocking, and temperature can differ. Just go for the rest of the article to get a stable solution.

The appearance is the major fact people go into the debate for vertical and horizontal GPU mounting.

What a high-end RGB configuration PC! They are functional and lucrative. Who does not like to hear this from one’s visitors?

And in the horizontal GPU mount, you can be the one to be hearing this. Your eccentric GPU backplate with stimulating fans spinning adds more fuel to your gaming atmosphere.

Vertical installation tends to the GPU set by the side panel in the case. As a result, the attractive backplate, the fans, and the RGB color dancing are seen outside the tempered glass. While operating the PC, you will enjoy the most aesthetic color dancing around your PC.

Horizontal is traditional. The GPU is installed in the PCI-E slot of the mobo facing the fan and backplate downward. Unfortunately, this fittings position hides most of the beauty of your RGB graphics card.

The appearance differs because of these two types of installation basis.

Vertical is the modern installation tactics, and horizontal is the age-old one; that’s it

Vertical GPU mount set the card bottom on the case and besides the panel. The modish backplate and the fans are visible from the outside.

And when you get the RGB GPU, the vertical mount GPU becomes your must-choose option.

But in the case of a horizontal GPU mount, it directly set the card on the motherboard, and the attractive fans face downwards to the CPU case bottom.

How should I place my GPU vertically?

You need a PCIe riser cable, a side bracket, and a bottom bracket to keep the GPU upright. Some PC may come with these verticle setting up facilities.

At first, set the side bracket and bottom bracket by the screws. Once done, fix the card on the riser cable and tighten the brackets. Finish connecting the riser in the PCI-E slot of the motherboard.

If you afford it, you can do a custom vertical GPU mount for your motherboard. But the case should be more prominent. You can buy a liquid cooler for your card though it is so expensive.

In the case of horizontal mounting, place the card directly in the motherboard PCI-E slot as long as the pin is compatible.

However, it is good to set a bracket to hold the weight of the card to avoid sagging.

What is the profit of beauty if performance is down? Do the mounting variations affect gaming?

Verticle systems possess a lower cooling space that results in poor airflow. Flat setting leaves spaces around to let the pc cool. But, both positions deliver the same gaming experience. You will get the same FPS speed in both mounting processes.

Besides, the RGB coloring exhibition also remains the same for both systems. However, vertical positioning declines the lifetime of other devices of the mobo.

Typically, you spend a handsome amount of money and labor on your graphics card.

Vertical positioning retains a lack of air passing space. It turns your PC hot and lessens its lifetime. You will notice the increasing fan spinning sound in this position. So, is vertical GPU mounting bad?

Check the benchmark. You will see the temperature from 73 degrees, and it will rise above 79 degrees or more. Hmm, it is alarming. But, if you use a water-cooled GPU, this temperature problem will erase.

Horizontal allows the air to pass under the case, and the sufficient space help to circulate heat properly. As a result, the other devices and motherboard remain well for many days. In this straight setting, the temperature rises to 71 degrees or a little bit more. It’s relaxing.

Overclocking is good for GPU performance though it upturns the temperature of the card. While overclocking, horizontal mounting helps to improve the clock speed.

However, vertical mounting makes it worse sometimes, especially when the GPU is a low-profile one. And you won’t get a good amount of clock speed rate when you try to overclock.

if you go for the standard rig settings, horizontal is better for healthier performance. But this flat mounting doesn’t allow you to display your expensive lighting devices. So, use a big case for vertical installing or expense a little more for a liquid cooler.

Yes. Vertical GPU set very close to the side panel and keeps little room for airflow. As a result, when you close the case tempered glass, the internal heat gets higher. This heat also affects the other chipsets of the case.

What do I do if my GPU doesn’t fit?

GPU is a big size card approximately a foot long. Sometimes it doesn’t fit into the case. So go for these 3 solutions of vertical GPU mount without cutting. Measure the HDD bay. Put the card in an angled way under the HDD bay and plug the card in the PCI-E slot. If it does not work, go for mounting with PCI-E riser cable, and GPU is outside of the case. If the former two solutions do not work, then buy a new graphics card with proper measurement.

What Is the Ideal Mounting Option?

Everybody wants vertical mounting as it shows the coolest presentation of the RGB GPU. But, threats of rising temperature confuse them with vertical GPU mount vs horizontal.

Of course, it is not a solution to hide the beauty of the card because of heat tension.

You have three ideal options. The first is to open the case’s tempered glass as the graphics card can adequately release air.

The second one is to customize your rigs with a big size case.

And the last and easy one is to buy a water-cooled GPU as it will enrich your pc aesthetic look.

Apart from these, if you are tighter with the budget and not going for the RGB graphics, then no need for bothering with the vertical mount. The typical horizontal mount GPU is still on its best performance rig.