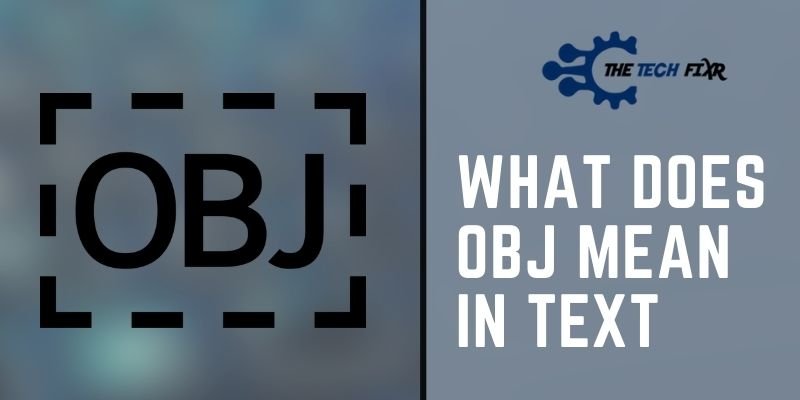 Have you ever seen a dotted box where you see an acronym OBJ in the text? Who likes getting interruptions while texting with your favorite person or friends? And this OBJ not only appears on texts, but you’ll sometimes see this box on your social media.

Did you ever wonder what does obj mean in text, what those dotted boxes are, and why OBJ appears on the screen? These are basically emojis or symbols that you can’t see on your device.

In the following discussion, we’ll talk about why you are unable to see those emojis on your phone or PC.

Table Of Contents show
1 What Does OBJ in a dashed box Mean?
2 What is OBJ Emoji?
3 What Does OBJ Mean in Text?
4 Why does OBJ appear on Facebook and Other Social Media Posts?
4.1 Software Bug
4.2 Updated Emoji Library of Apple
4.3 Using Voice-to-Text Option
4.4 Corrupted Data
5 What Does the OBJ File Contain?
6 How to Get Rid of the OBJ Dashed Box?
6.1 Fix OBJ Problem from Android and IOS
6.1.1 Method 1: Update the app
6.1.2 Method 2: Download New Emoji Keyboard or Emoji Library
6.2 Fix OBJ Problem from Windows and Mac
6.2.1 Method 1: Update the OS
6.2.2 Method 2: Update Browser
6.2.3 Method 3: Install New Emoji Library on Your Mac and Windows
7 Frequently Asked Question (FAQs)
7.1 Is OBJ error a virus?
7.2 What is the meaning of the empty square in a text?
8 Final Verdict

What Does OBJ in a dashed box Mean?

When you see OBJ for the first time in text, Facebook, or Twitter, you may find it a little unusual. OBJ in a dashed box is an acronym of “Object Replacement Character.”

OBJ is generally a placeholder object and appears on texts or posts when your device can’t identify the object.

Simply put, OBJ is the replacement of a special character or emoji that your device can’t display on the screen. Basically, whatever you see on your texting apps like Facebook, Instagram, Twitter, Tiktok, or WhatsApp are objects.

object pops up on the screen like or � instead of those objects. It happens mostly in the case of emojis or special characters or symbols that your device doesn’t support.

What is OBJ Emoji?

Web pages are nothing but filled with objects that display every little thing you see on your screen. That means every letter and emoji you see on the screen are nothing more than an object.

Thus, when you see a post or receive a text from someone containing emojis that your device can’t recognize, obj emoji replaces those certain emojis.

Now you may wonder why do they even appear on-screen when your device can’t recognize them?

Because your texting app function receives the text with the emoji objects, but as your device is unable to detect the object in your app, OBJ objects replace the Unicode.

Unicord was invented to understand computer functions clearly. Sometimes, you can’t even upload a picture on your Instagram due to OBJ emojis.

What Does OBJ Mean in Text?

If you receive a text from a friend and your friend writes OBJ in the text, it may refer to Objective or any other short forms of words. But if you get the text with OBJ in a dotted box, it means the app program has interpreted the object as the Universal OBJ.

It happens because your device’s library can’t present the emoji or special character of the text. However, don’t be worried about this issue as it helps the app function to run properly.

Why does OBJ appear on Facebook and Other Social Media Posts?

Objective Replacement Characters not only appear on texts, but you will also see them in your social media posts as well.

Instagram and Facebook have OBJ errors more than other social platforms. There are a few things responsible for this occurrence, such as:

A software bug is the first reason behind the OBJ emoji issue. You may have seen your phone working fine yesterday, but you are getting OBJ emoji issues the next day.

It mostly happens due to bugs in your device software or the application. To solve this problem, you can try updating your social media apps and keyboard. If it still doesn’t work, you may need to update the operating system of your device.

This is the most common and ongoing issue for people. Apple updates its emoji library by adding new emojis quite frequently.

And without having updated Apple emoji library and especially android users are unable to see the new emojis. Simply because your device doesn’t support those emoji or characters.

This error commonly occurs when an apple and capable android device user uses the voice-to-text function to write a comment or post. But due to your unrecognizable accent, the program deals with many errors.

And that’s when the software replaces your unrecognizable voice with the OBJ symbols or objects.

Basically, there is nothing you can do about this matter except speaking slowly to allow the software to understand your command.

Corrupted data issues are pretty rare among smartphones but quite familiar with Mac and Windows. This issue occurs mostly during the data transferring process to your device from another.

And an unstable internet connection is a common reason behind this problem. Due to missing data, your device displays a placeholder object instead of the objects you received.

What Does the OBJ File Contain?

How to Get Rid of the OBJ Dashed Box?

You are probably facing this problem regularly, and it is quite frustrating how you cannot see what they are sending over text.

Thankfully, there are some quick solutions to get rid of the OBJ dashed box from your android, IOS, Windows, and Mac. Here are they:

If you’re facing similar issues like above in your android and iOS device, here’s your solution.

Updating the app is the basic way of getting rid of the OBJ problem. You can simply update your social media apps from the Google Play Store and Apple App Store. If updating the app doesn’t fix this problem, you can try updating the Emoji library of your device.

If you still see this issue occurring in android or Apple, you need to update the OS. Follow the following steps to update OS:

Another way to fix OBJ issues is by downloading a new Emoji keyboard or Emoji library on your device. It’ll update the existing emoji library, and you will eventually get rid of the OBJ error.

If you want some suggestions for an emoji keyboard, you can try G board, Bitmoji, and Swift Keyboard for Android and IOS.

After installing these keyboards, set them as the primary keyboard, and you should not see the OBJ issue again.

The OBJ problem doesn’t spare windows and mac devices as well. If you own one of them and faced the issue, here’s your effortless fix.

Microsoft and Apple devices update their emoji libraries constantly, and you have to update your OS to match the latest version.

New emojis will be available on your devices once you are done updating the device. How can you update your Windows and Mac OS?

Windows Users: Go to settings and search for new updates. When you find the available update, download the app and let the app reinstall. That’s it.

Mac Users: Go to the Apple menu, then go to the System Preference. Check for available updates, tap on the download and install the app to update the OS of Mac.

In both Windows and Mac, you need a browser to access your social media or texting apps. So updating the browser, you use can update the emoji library your browser is using.

That’s why you need to update your device browser regularly to have a smooth experience without seeing OBJ on the screen.

Method 3: Install New Emoji Library on Your Mac and Windows

You can also apply this trick on your macOS and Windows. But the process is a bit different for Mac and PC than phones. As you use a physical keyboard with these two devices, you need to enable new keyboards by following some steps. Here are they:

For Windows Users: Tap the Windows key on the keyboard and full stop (.) simultaneously to get the windows emoji interface. Then click over the emoji you want to insert on your message, and you are done.

For Mac Users: Click on where you intend to type an emoji, then type CTRL+CMD+space. Now an emoji panel will pop up in front of you, then look for the emoji you want to use in the text. Then you have to double click on the emoji to insert it into the message.

All the above methods are pretty effective in getting rid of OBJ dashed boxes. If you follow the techniques correctly, you’ll surely be able to fix this issue quickly.

Is OBJ error a virus?

No, It is not a virus, and there is no need to worry about this problem. OBJ is a placeholder object that replaces the unrecognizable characters or emojis by your device. So it is just a simple issue that you are facing because your device doesn’t support those objects

What is the meaning of the empty square in a text?

Empty squares, a rectangle with a question mark, and OBJ are similar issues of unrecognizable characters to your device. If the data you are receiving contains any object your device cannot display, these errors appear on the screen.

Finally, We solved the puzzle of what does obj mean in text and social media posts. We’ve also discussed the responsible reason behind this issue.

Object Replacement Characters are not any big issues in your device. These are just the objects that your device can’t display to you. Also, we’ve shared our OBJ fixing methods with you if you want to get rid of them.

We hope all the information above about OBJ was helpful for you.