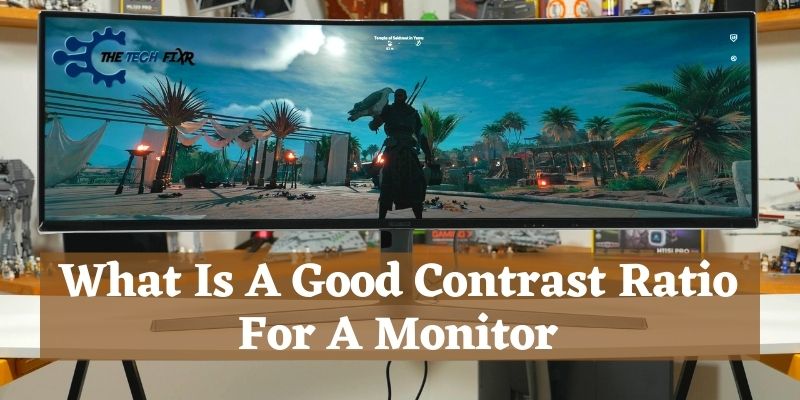 What is a good contrast ratio for a monitor? The standard ratio is good to go with 3000:1. But in different perspectives, it may vary sometimes.

Contrast ratio, you’ve probably come across the term when you went to buy a monitor, and you probably ignored it because it sounded too technical or simply geeky.

Or, you might’ve questions, like what is contrast ratio anyway? And why does it matter? In this writeup, we’ll try to tell you all about the contrast ratio in monitors, why it matters, and so on.

So, without further ado, let’s dig in, shall we?

What Is Contrast Ratio?

Contrast ratio mainly is a technical term used to measure the disparity of the highest and the lowest amount of brightness that a screen is capable of displaying or delivering.

To put it more simply, it gives you an idea of the whitest and the darkest shades a monitor can show you, in numbers.

You can assume the parameter using a checkboard pattern in black and white, which looks pretty much like a chessboard.

As it’s the brightness level featuring ration, so the units are measured in numbers like 1000:1, which means a full-field black image on this monitor will be a thousand times brighter than a black one.

Why Does It Matter?

Now that you’ve gone past the what parts, next comes the why part. Why does contrast ratio matter, anyway?

To understand this, we’d have to take a look back at our elementary science book. Remember how our eyes work?

The light enters through a tiny little opening called a pupil. The colored part of the eye, known as the iris controls how much light gets in through the pupils.

The photoreceptors turn light into electrical signals that travel from the retina through the optical nerve straight to the brain, and thus, we can see.

Now, the range of brightness displayed by a monitor plays a direct role in determining how many electrical signals the brain will receive from that monitor.

So, the more the contrast ratio, the better or more natural-looking display the monitor will produce. That’s why contrast ratio is a really crucial thing to consider when buying a monitor.

What Is A Good Contrast Ratio For A Monitor?

The best idea would be to get a higher-end monitor that has a static contrast ratio of 3000:1, giving it a dynamic range.

As we mentioned before, the contrast ratio directly determines the level of brightness your monitor will be able to display.

Having said that, does having a higher contrast ratio really mean you’d be getting a better view on your display? Are there any limits to how high or low should an ideal contrast ratio be?

LED-backlit monitors of today can shut off the backlights of the pixels in the areas that have pure black color, leading to a darker shade of black and increasing the difference in contrast with the brighter colored pixels.

The dynamic contrast ratio provided by today’s monitors can reach up to 50,000,000:1. On the other hand, the static contrast ratio is a more realistic and, therefore, more grounded measurement of contrast performance.

It also provides the measurement of the distance between the entirely black and entirely white pixels, but instead of shutting the backlight off when displaying the black pixels completely off, it keeps their brightness to the lowest.

The bigger this number gets, the more natural-looking image your monitor can produce. Well, the more ratio the monitor has, people mostly fall for it.

But that is not a wise decision at all!

Although some specific users, such as gamers or people who use their monitors for professional video editing and VFX, might prefer monitors with different contrast ratios, the ideal contrast ratio for a monitor for regular usage is 1000:1 to 3000:1.

But if you ask what is a good contrast ratio for a monitor for gaming purposes, more contrast levels can be in your choice list.

LCD Or OLED: Who Provides A Better Contrast Ratio?

LCD stands for Liquid Crystal Display, and as the name suggests, LCD works by utilizing liquid crystals that have molecules arranged in a very unstructured manner.

When they’re exposed to electricity, they expand all of a sudden and form a very well-structured and interconnected shape.

OLED, on the other hand, refers to Organic Light-Emitting Diodes, which means that they are basically extremely tiny lights, gathered in a structured form. The setup of these tiny lights across a screen is pretty similar to how liquid crystals are laid across an LCD screen.

The main difference is that the light-emitting diodes are divided into separate zones.

It’s totally up to the user’s preference, but most people find the contrast ratio produced by OLED monitors to be more soothing to their eyes.

This totally depends on your definition of ‘good’, but generally speaking, it’s a pretty decent contrast ratio suitable for regular usage.

Is a higher contrast ratio better for monitors?

Yes, and no. There is a basic standard, say, 1000:1 to 3000:1. Anything below that is not a good contrast ratio, and anything above that is not entirely necessary unless you’re a gamer.

Should contrast be higher than brightness?

Bear in mind that while choosing a monitor, you should also consider the purpose of buying it, and the atmosphere it will be used in.

There is no fixed standard for what a good contrast ratio is. Everyone has own preferences. But if you’re new to all this, you should at least be able to get some basic idea from our article.

We hope this article helps you understand what is a good contrast ratio for a monitor and helps you get the monitor of your choice.