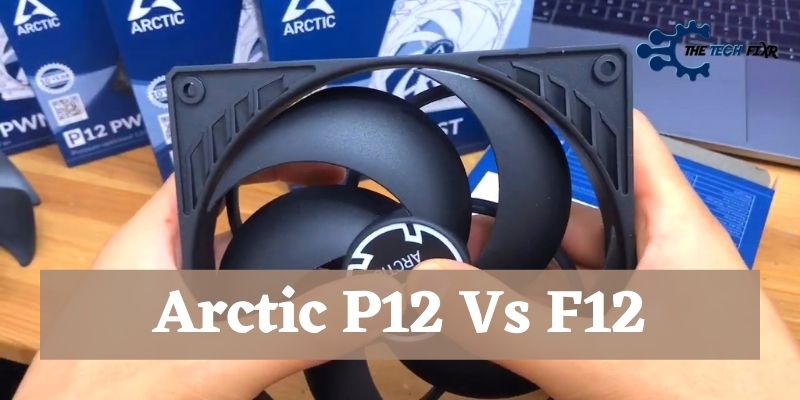 What is the difference between Arctic P12 and F12 fans? Arctic P12 series fans are the right fit for the radiators, whereas F12 would be ideal to use as a case fan on the rear or front.

But there is not remarkable difference in noise, though. So, are you also tangling in the battle of Arctic P12 vs F12?

We have sorted this out with a clear explanation of the right place for each fan with featuring benefits.

So, let’s know about the 2 fan’s features and the quality, and which one is comparatively better.

These are some noticeable differences between the series of Arctic CPU cooling case fans. Let’s know about them to make your ideal choice.

Before starting the comparison between them, let’s have a short description of each.

Well, at first, Arctic PC fan F12 was released in August 2018. In the following year, after two months, in October 2018, Arctic released another one named the P12 series.

And being newer with modifications, P12 is a bit more satisfying compared to the F12 series.

Well, in our perspective, the main comparison is the type of fan. The P series’ P stands for the pressure of the fan, so more RPM with higher air pressure.

Whereas the F series is mainly for airflow optimized and Less RPM categorized.  That is the noticeable thing, we think.

The newer series P12 came after being developed in Germany. So, you can assume the powerful fan blade design for better airflow and more pressure.

Oh, the latest P12 Arctic PWM fan, such as the Arctic P12 PWM 120 mm fan, comes with a Neodym-Iron-Boron-Magnet ring in the fan that makes the robust fan build with a powerful performance source.

On the other side, the F12 fan comes with some innovative design that makes the fan work in 2 ways to keep the CPU cool. It, at the same, suck away the warm air from out of your CPU and blow a sufficient amount of cool air inside.

The basic comparison people can find here when it’s about the fan purpose. Yes, the P12 and F12 fans differ here so precisely.

Let us clear the statement. Basically, the Arctic P12 fan is a fan with higher static air pressure. And so, it’s can do its best when you use it on the radiator, especially.

It would be best to get the Arctic P12 PWM series that has the pressure-optimized quitter motor.

The PWM series P12 fan can perform its best when you are looking for something that will have a focused airstream.

For instance, the Arctic F12 PWM PST, the sharing technology included fan, comes with 53 CFM of airflow at 1350 RPM fan speed. And people like it as a quitter heatsink fan of their system.

However, this P12 PWM PST Arctic fan has the quietest fan motor, and it’s recommended by many users also.

Fan Noise Is Pretty Same on Both Fans

As we showed, the case fan blade design is quite different from each other the noise also contrasts a bit.

Since P12 has very long, severely bent blades, whereas F12 has a bit shorter blades.

We found from the Arctic P12 PWM reviews that it is pretty quiet, and F12 is a little noisy. But the triangle comes when the newer series of Arctic P12 with 3 pin connector comes with an extra quiet motor that really makes it super quiet that you may want to keep it in your choice list right now!

However, the F12 fan has the same 0.3 Sone of noise level, which does not make this fan to be called that noisy at all.

You can notice it if you do experiments on both case fans. But to be honest, the noise level is not much higher. The fact is F12 supplies a bit of noisy sound, and it is neither unbearable nor much noticeable.

As the P series is a modified series of arctic case fans, the P is in the leading position of flowing air. For instance, P12 can pass 56.3 cubic feet of airflow per minute.

On the contrary, F12 is capable of passing 53 cubic feet of airflow per minute, which is comparatively low than Arctic P12. But this does not make it an avoidable fan at all.

So, there is a distinction of RPM of the two series of Arctic. Almost all of the P12 Arctic fans have up to 1800 rpm of fan speed. And it rotates with the maximum rpm.

If you want can get the RGB one of the P12 PWM series that has 2000 rpm of fan speed. And this is the brighter and quitter fan from Arctic latest innovation that everyone likes to have one in their build.

Contrarily, the F12 comes with 1350 rpm fan speed, and so as a standard case fan, Arctic F12 fan is ideal with a decent price tag. And the only drawback is it’s a 3 pin connector fan.

These are the prominent feature’s dissimilarity between Arctic P12 and f12. But if we are supposed to suggest you purchase one of them based on fan speed, we will say to pick Arctic P112.

You already know by now that the significant comparison between the two series of the Arctic fan comes after fan efficiency is in price.

If you look for the price of Arctic F12 and Arctic P12, you will see P12 is half of F12’s price. But they both have almost the same performance with slight differences.

However, we can come to conclude that you can pick the P12 if you are tight with the budget.

What is the major difference between Arctic P12 and F12?

Basically, Arctic F12 is expensive but best for its focused airflow, and P12 is comparatively cheaper with static high pressure.

There is no doubt to appreciate the goodness of Arctic P12. Moreover, it is a quiet and speedy fan compared to other case fans. Not only that, the PWM fan is convenient for people looking for a quieter fan.

Which Fan Should You Buy?

However, now it is clear to you which one you should purchase since you know the comparison of Arctic P12 Vs F12.

The PWM P12 can perform the best in contrast to the F12. Other than this, both fans feature quite the same.

Well, if you have the budget concern better to go with the P12 PWM- higher airflow with lower noise.