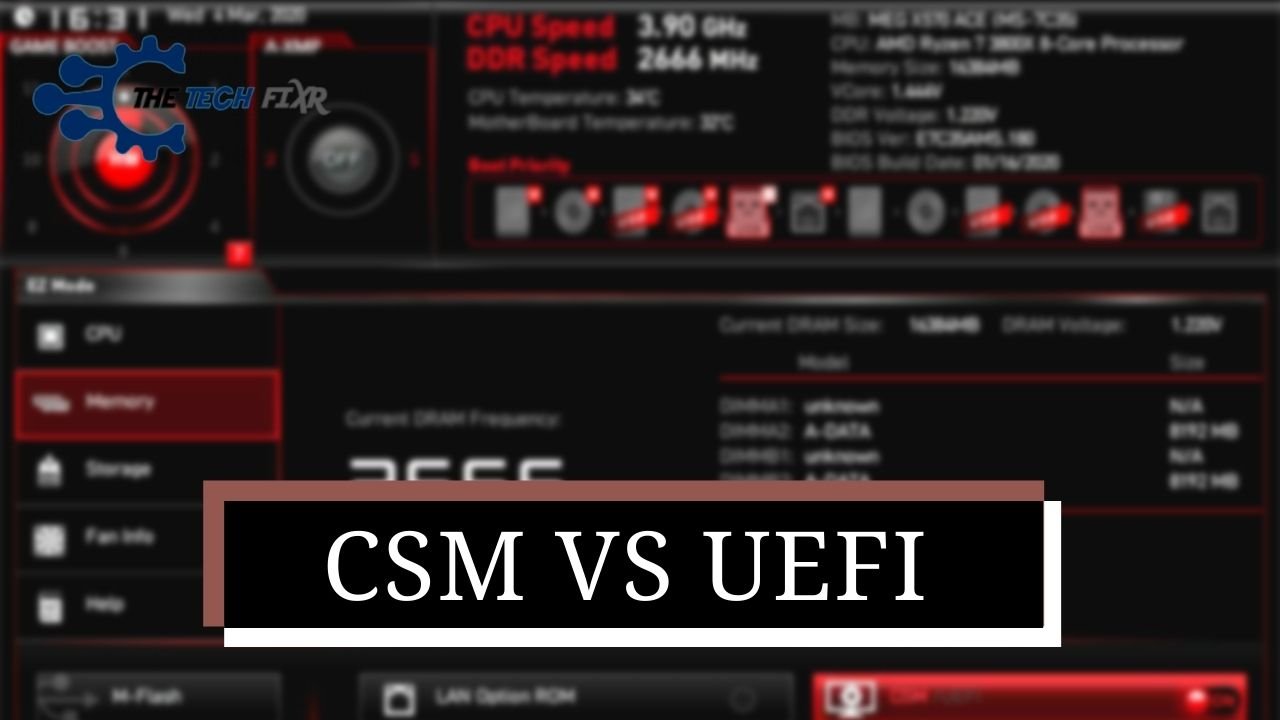 What is the difference between CSM and UEFI booting? CSM, also known as the legacy BIOS, is less secured, whereas the BIOS in UEFI mode comes with more security and upgraded options. But you may not find the UEFI mode or CSM on all systems.

When you are trying to reset the BIOS or update your system to Windows 11, it may show that the bootable mode is not supported or needs to be in secured mode.

So, before changing your computer BIOS, know the significant differences between CSM and UEFI bios with their beneficial aspects to avoid further mess.

And in this write-up, we have compared CSM vs UEFI– 2 BIOS setup mode with clarification. Check now.

Table Of Contents show
1 CSM Vs UEFI BIOS- At a Glance
2 UEFI Vs CSM Booting Mode Comparison
2.1 CSM & UEFI Basic Aquaintances
2.2 UEFI Vs CSM Processor Compatibility
2.3 Differences in Disk Partition Format
2.4 UEFI Wins Over CSM for Extensive Supportive Features
2.5 CSM & UEFI Security Benefits
2.6 UEFI Vs CSM User Advantages
3 Frequently Asked Questions (FAQs)
3.1 Which is best, UEFI or CSM?
3.2 Should I disable CSM?
3.3 Can I change from CSM to UEFI?
3.4 What is UEFI mode?
3.5 Does Win 7 support UEFI?
4 Which Boot Mode Is for You?

CSM Vs UEFI BIOS- At a Glance

Check out the side-by-side comparison and know what would be the ideal booting method for your PC.

Suppose you don’t have any idea about computer BIOS; in that case, you need to know about the basics BIOS of a computer.

Similarly, to know about the differences between UEFI and CSM mode, you must know what BIOS is.

BIOS refers to Basic Input/Output System of a computer where the installed operating system gets loaded after pressing the power button.

In a straightforward term, the BIOS system of a computer makes the PC ready for booting up the operating system and wakes up the other hardware components like RAM, Hard Disk, etc., to be ready to get on work of data collection, processing, and so on.

And CSM and UEFI are 2 interface modes of computer BIOS. Basically, in earlier times, computer booting systems came with the CSM mode known as the Legacy bios.

CSM (Compatibility Support Module) mode used to be the only method for most of the older PC OS loading.

On the other hand, UEFI (Unified Extensible Firmware Interface) is an upgraded booting system that you can run individually or enable the CSM that includes some additional security features and more.

Now, if you want to learn the bios compatibility with the processor, if you have a very old PC from your grandfather’s generation, it may not be able to boot in UEFI mode.

But most of the modern PC lets you choose to set the system booting mode to either legacy/CSM or UEFI+CSM mode.

Typically, a PC with the standard legacy bios that is the CSM boot mode enabled can run the system using a 16-bit mode of the processor.

So, for a faster boot, UEFI is one 2 steps ahead, but you need to consider whether the processor is supported to UEFI mode or not.

While comparing legacy vs UEFI, the major differences come in disk partition systems. There are 2 types of disk partition formats- one is the MRB (Master Boot Record), and the other is GPT (Guide Partition Table).

The legacy bios or the CSM mode works with the disk partitioning in MBR mode. And so, if you have any hard disk installed in your computer and the system bios is set to CSM mode, the system can not work with that disk.

Then, another sad fact is in CSM mode booting, and it can load the disk up to 2 TB size. So, if you have more than 2TB disk, it can not load the disk.

On the other side, in UEFI booting mode, it can work with the disk of the GPT partition, which features far better than the MBR partitioning.

Besides, the UEFI booth menu can run up to 8 ZB size disks. So, you have a massive chance here with your system loading option.

You see, when your system starts booting your machine using the CSM boot mode, it takes 512 bytes of space format to load the installed operating system in your pc.

On the other hand, a system loading with the UEFI mode enabled takes around 100 MB specific size format to load the operating system.

Again, to run some updated drivers, like, the Windows 11 that uses the M.2 TPM drivers needs the UEFI-enabled loader to prepare the operating system.

However, UEFI also uses the CSM format in its booting though ignoring the disk partition scheme. It means if your motherboard comes with the UEFI boot menu’s compatibility, then there is the option to enable UEFI with CSM mode.

Any machine with Windows 7 or later operating system installed can run the booting with UEFI mode.

But you can not run the UEFI boot menu to load Windows XP or earlier version operating system.

When it comes to the secured booting, UEFI booting mode fives the machinery systems a more secured path than that with the legacy bios.

The system can run through all the hardware and load it more securely if the bios mode is enabled in the UEFI features.

The opposite case is with the CSM boot system, where the hardware parts are left with some security vulnerabilities.

In the UEFI mode, the system loads the boot through several steps like PEI, DXE, BDS, TSL, and finally, the runtime ensuring the utmost hardware security building a trusted firmware root.

Though the booting procedure is relatively longer than the legacy bios, boot time is faster than boot time with only CSM bios mode.

Another beneficial part comes ahead when talking about the advantages you can get working with the only CSM or the legacy bios and the helpful UEFI bios mode.

The thing is, legacy bios mode works with the character meaning it is a Character User Interface system where you need to use your keyboard to command the setup and change the settings if you need.

Contrarily, the bios with UEFI mode works with Graphics meaning it is a Graphical User Interface system where the system settings support the mouse to use to read and accept the given user commands and check the CPU fan rpm speed as well.

So, the UEFI mode bios settings come with more beneficial upgrades, we can say.

Which is best, UEFI or CSM?

A: Of course, UEFI. UEFI or the UEFI with CSM can give your system a better boot loader with advanced security features and fast booting option.

Should I disable CSM?

If you want to change the boot mode, then at first disable the CSM mode and then set the BIOS system in the method you wish to. Without disabling, you can’t change the system boot menus.

Can I change from CSM to UEFI?

Yes, you can change it as long as there is an option for UEFI mode, and the disk partition must be in GPT format.

What is UEFI mode?

UEFI mode is an upgraded mode of legacy BIOS systems where you can find both CSM with UEFI and only UEFI options. It is basically a successor to the legacy bios systems.

Luckily, yes. It is the lest Windows operating system that supports loading the system in UEFI mode.

Which Boot Mode Is for You?

Before ending this clash on CSM vs UEFI bios mode, you should know that UEFI also comes with the UEFI with CSM, where you can enable or disable the CSM mode and go on with the operating system loader you wish.

If the hardware machines support it, you can also convert CSM to UEFI and provide your system with a secured system loader to run through.

But truly, it’s not the battle between CSM and UEFI; instead, a battle of legacy vs UEFI bios mode.