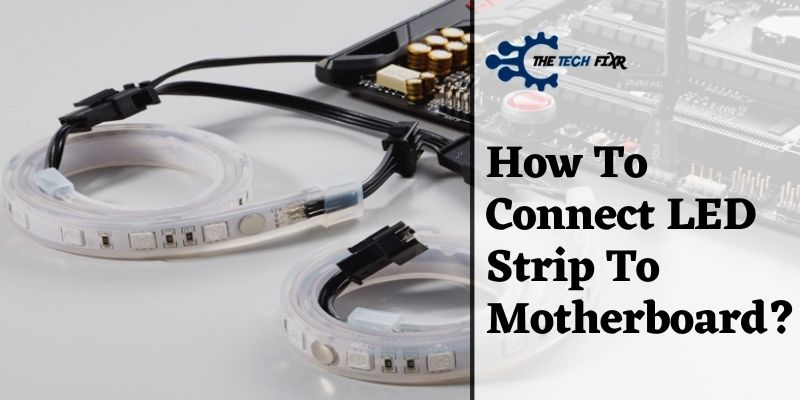 It depends on how much voltage the LED strips need. You see, some can work on 5V, 12V. At the same time, some strips work on 24V-48V. You can’t assume because some computer parts have RGB LEDs that can shove in any LED strips.

Last year, my cousin asked me if he had a strip that could run on 5V and connect it to the P.C. via a USB cable. But his question is, even if they run on 12V, how can we connect them to the motherboard?

So, we will discuss some strategies by which you can easily connect it to the motherboard and some other tactics as well.

Table Of Contents show
1 How to Connect Led Strip to Motherboard
1.1 Steps For Connecting LED Strips With 2-Pins
1.1.1 (For Male DC connector/ Molex)
1.2 Steps for RGB light Header with The Motherboard
2 Frequently Asked Questions (FAQs)
2.1 How To Add LED Lights To Pc?
2.2 How is a LED strip connected?
2.3 Can you connect LED strips together?
2.4 How do I control RGB strips on my computer?
3 Conclusion

How to Connect Led Strip to Motherboard

The motherboard has a pin that usually belongs to a pin pitch of 2.54 mm. Most of them have a current limit. Things that you plug into motherboards have been designed to work with them. Again, a motherboard without any LED strip connector headers may cause problems if you use it.

Motherboards such as the GIGABYTE Z390 AORUS PRO, ASUS ROG Strix B550-F, MSI MPG Z390 Gaming Plus,  and some other upgraded ones come with the LED strip connector headers on the board.

On the other hand, LED strips have their power and ground and control pinouts. You may now ask, what are they?

Pinouts are adapters that are used to work for connections and contacts with the electric components in place.

Anyway, let us switch on the steps vividly.

If you have a LED strip with 2-pins, connect it to the Molex connector.

Before that, you’ll need to take the wires out and indulge them into the connector. Stripping the two wires and attaching them with a supreme connection of Molex is an alternative way you could try.

But keep in mind that inserting the two wires in the right place depends on the voltages. In general, they have multiple voltages such as 12V, 5V, 7V, etc.

You can also take help from Molex. Some technicians connect the LED strip to the Molex for better resolution and power. You may now ask how to connect LED strip to Molex connector.

Again, if you buy the male D.C. plug to fit the I.C. controller, then use the yellow wire to the Molex plug for the 12V+, and either one of them is negative.

And then ensure that you’ve looked at the connector to get the wires on the right. Thus, you can build up your P.C with LED lights using a Molex connector.

You can hook them to the yellow and either black for your LED.

Again, if you buy the male connectors, put in the red and black wire altogether. It will act as a D.C. connection. By this, you can see the LED light up on the P.C., and it will all be set aside.

Ok, now one thing you may ask is where to put LED strips in pc case. Well, you can put them anywhere along the edge where you think it looks perfect.

If you’re still confused about what to put them in, then shove them into the magnetic version of the cable mod strip. Again, it’s better to put into the Define C or inquire where other people keep them. This way, you can figure out which position is suitable for the strips.

Steps for RGB light Header with The Motherboard

The RGB header allows easy installation and doesn’t tie-up with the USB header, which you need for maximum front-panel ports. Henceforth, RGB lighting for pc comes with two titles.

As an example, the Asus prime X299A motherboard has 2-types of RGB headers like RGB_header-1 & RGB_header-2. You will find the motherboard RGB header on the top edge of the board near the power connector. The second one you’ll find on the bottom edge between the front panel near the panel audio and serial port headers.

You can switch on the aura RGB header in the latest version, which has three independent zones. So, you can sync and install it with the P.C., speaker and keyboard easily.

Then you need to connect it to the connectors on the motherboard, which indicate RGB. But the trouble arises when it comes to unmarked. Some RGB header motherboards will likely include this, or some won’t.

Some RGB headers on motherboard can be used and driven by connecting the older Molex. You can use adapters for adapting the lights on the Molex if they’ve already been dumped.

Moreover, if your motherboard does not have the LED strip header pin or you can’t find the connector, try the USB-biased LED strip lights like the Maylit 8.2 ft Led for easy connection.

How To Add LED Lights To Pc?

To add LED lights to the pc, first, take out your case’s left side panel. Then clean it carefully. Next, cut out the LED strips into a nominal size and secure them in the right place. Try to connect the strips in parallel. Now, splice the strips into the MOLEX connector. Finally, plug in the Molex connector with the male connector from the power supply.

How is a LED strip connected?

Can you connect LED strips together?

Yes, you can connect LED strips together with an upper limit. It depends on your strip’s power outputs and power sources. You can also connect them with cable, connectors, or soldering the joints equally.

How do I control RGB strips on my computer?

You can control RGB strips on your computer by heading to the RGBpx menu. Here, you can select the color for the LEDs from the color wheel/ preset colors. It will allow you to adjust the brightness of the LEDs and address each one separately.

So, how to connect LED strip to motherboard may now be clear to you. There are several ways to rely on this topic.

Besides, here, we discuss 2 best and most accessible strategies. Some modern motherboards have both RGB controllers and connectors. ARGB (3-pin) and RGB(4-pin) have both connectors twice so that you can attach them to the motherboard frequently.

All the things depend on what type of strips you have. But if the motherboard didn’t have any RGB support, you should have an external controller for this. Thankfully both ARGB and RGB had USB control while others didn’t have buttons.