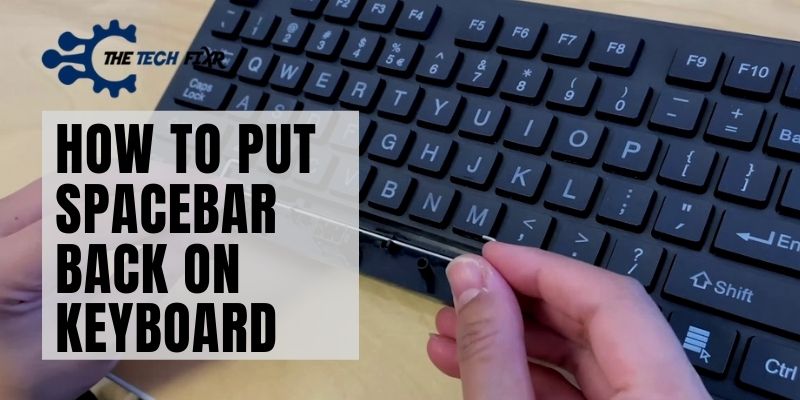 If you are thinking about how to put spacebar back on keyboard, then it’s very easy, and anyone can do it if one is a bit careful and knows the real tactic.

Sometimes the spacebar simply stops working for software-related issues. In those cases, upgrading or reinstalling the keyboard driver will fix the problem.

But in case of physical issues like falling off or getting stuck, fixing the software can’t get the spacebar running. In situations like this, you should put the key manually back to the keyboard.

If you want to know in detail, please carry on reading.

How To Put Spacebar Back On Keyboard- Easy Steps Explained

Every keyboard from different manufacturers does the same thing. Yet fixing problematic keyboards is not exactly the same task. Below we will discuss how to fix spacebar in keyboards from different vendors, and it will work on all laptop and external keyboards.

Keep reading; you will find the specific process which can fix the spacebar issue of your keyboard.

How to Put Spacebar Back on HP Laptop

The keycap of the spacebar may get stuck or fall off. If it falls off you, just have to put it back. And if it’s stuck or half attached, you need to take it off first.

Give the screwdriver a gentle nudge and pull the keycap off even more gently. You will hear a click, and it’s off from one end. Do the same to the other end. Now the keycap is in your hand.

Determining the positions of the hooks and holes is crucial. You will see in a minute.

Do the same with the upper legs of the other metal bar.

But you can’t see that as the keycap now sits on the keyboard frame. At this point, press gently over the spacebar so the hooks underneath can grab the metal bars.

Kudos! Your spacebar is back on live.

How to Put Spacebar Back on Keyboard Lenovo

The Lenovo spacebar is pretty much the same as HP’s.

Now, a gentle snap or nudge will do the trick, and the hinges will be attached to the frame again.

The space bar of the Lenovo keyboard is fixed now.

How to Put Spacebar Back on Dell Keyboard

The structure of the spacebar of the Dell keyboard is pretty much the same as HP or Lenovo. The only difference is it has one extra stabilizing metal bar attached.

The whole process is almost the same as HP or Lenovo

How to Put Spacebar Back on Keyboard Logitech

The build of the Logitech spacebar is a bit different from the spacebars that we have discussed so far. Well, if you can get the steps for this one, you can handle any other external computer or laptop as well.

It is different in that its hinges or retainer keys are part of the plastic keyboard frame. There are two plastic tabs outside each of them to grab the metal bar.

If your push doesn’t break the spacebar, hopefully, now it is fixed.

How To Put Spacebar Back On keyboard MacBook Air

Let’s see the steps if you need to fix the spacebar key on MacBook.

How do you reattach a spacebar on a laptop keyboard?

In most cases, the metal bars have to go through the pin-holes of the keyboard frame. And then a gentle push will do the trick. The Logitech and MacBook Air have slightly different builds, but they also work following the same principle.

What key can I use instead of a spacebar?

A built-in feature in Windows permits the user to remap the keys to be used as other keys. Another way is just to use software to transfer the spacebar’s functionality to another key. However, on Mac, you can use the virtual keyboard.

So, you see that if you know how to put spacebar back on keyboard, you can get it back to work.

While the processes we have discussed are entirely possible to imitate, but you have to be careful not to break the hinges or plastic parts. Because if any parts get broken, then the whole practice may end up costing you more money.

But we believe that you don’t have to be a hardware engineer to have a few tricks up your sleeve to solve a computer hack or two.

You might need practice, but believe us when we say – it is totally worth it.