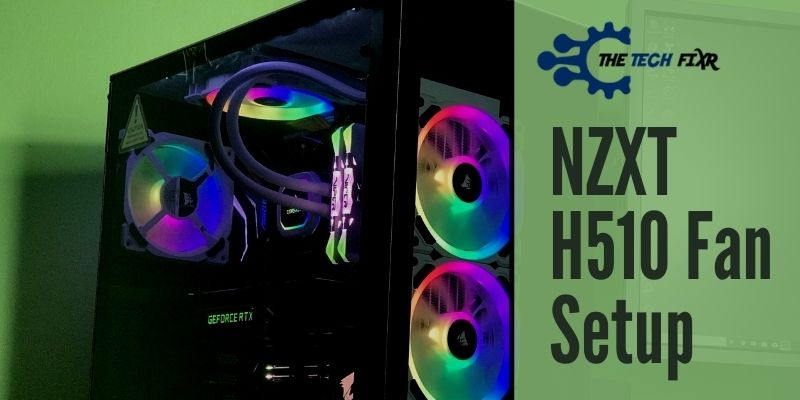 Do you want to install fans inside NZXT H510 but are confused with the NZXT h510 fan setup process. With just 5 steps, you can set it up and master the PC build.

Mostly there are two pre-installed fans in NZXT h510. If the two fans are not enough to cool your CPU, then you can install more.

We enclose here all the essential information about the NZXT h510 fan installation process. For more details and tips, please go through this article.

The NZXT H510 comes with 2 two fans installed. But some may want to move them or add more fans for their computer CPU.

Here is a guideline for NZXT h510 fan installation. Before that, let’s know where and in which direction you can set them up.

Where to Install the Fans?

Inside the case, you will notice that you will see a bracket mount with thumbscrews at the back and front. You have to remove the screw and unmount the bracket and place the fan in it.

You can also install a fan on the inner top of the case.

You can plug fans either directly to the motherboard or with the help of a Molex connector to the PSU.

Which Way Do You Mount A NZXT Fan?

You also need to know the direction of mounting fans. The fan from the front side of the case generally draws cool air from outside while the rear side fans blow out the hot air. The top fans are used as an exhaust fans, and the side-mounted fans are for air intake.

The NZXT H510 fan installation is not that hard. Follow the steps below to install the fans.

Tips-1: Installing the fans in the right direction is very important. Usually, fans have stickers that indicate the airflow direction. The fan’s blade curve indicates the direction of the fan orientation. An arrow on the fan also helps to determine the direction of airflow.

Tips-2: Check all the connections. If there are any loose connections, the fans may not work.

Tips-3: Make sure that the connectors are connected in the right order to the headers.

Which Is The Best Fan Configuration For NZXT H510?

The NZXT H510 Elite having pre-installed fans in the rear and front. The best configuration for exhaust fan NZXT H510 is to be config at the top, rear. The front fan is best for drawing cool air from outside.

How Many Fans Do You Need For NZXT H510?

NZXT H510 comes with two pre-installed fans. I think it is enough for NZXT H510. But if you need more fans to cool the inner side of the case, NZXT H510 can install a maximum of 4 fans.

Are The NZXT H510 Fans Intake Or Exhaust?

In most cases, there is a specific side as the intake and exhaust sides. The NZXT H510 fans in the front of the case usually draw air while the fans at the rear side of the blow air out. As hot air goes up to the case top, the top fan is also used as an exhaust fan to blow the air out.

Did you know how to do the NZXT h510 fan setup before? During work, your computer CPU produces heat. Excess heat can cause damage to your CPU, so it is very important to maintain internal ambient temperatures.

NZXT H510 cases get more temperature than the other cases. For this purpose, you may need to add more case fans to your NZXT H510, especially when you are a heavy gamer or professional editor.

If you learn this, it will be helpful for you. In the NZXT H510 manual, you will find the guideline for fan setup.

However, in this article, we have described the NZXT h510 installation guide step by step for you to the motherboard. We hope this will allow you to install the fans easily.