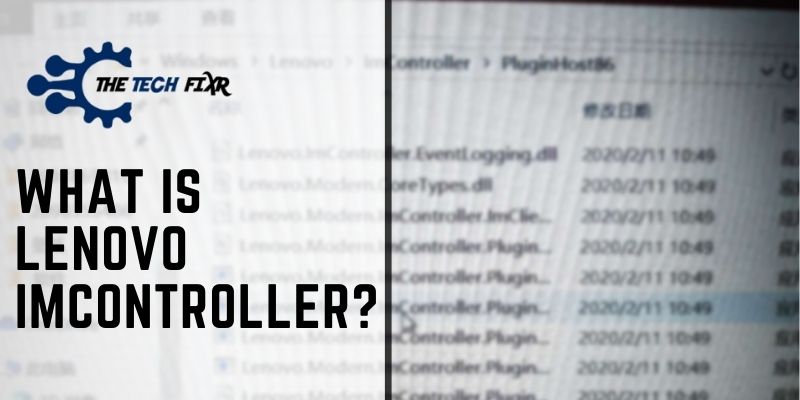 It is preinstalled by Lenovo and may eat up spaces. But if you want to delete these systems, you have to be careful.

So, know well first before going for any decision.

What Is Lenovo Imcontroller File?

When you buy a Lenovo computer, you will get interface software files like the Imovontroller file. Maybe you became afraid thinking that it is safe for your computer.

Ok, now let us clear out your confusion with all details about Imocontroller files.

The file is stored as a .exe file as known as an executable setup file, and it’s basically a firmware setup designed by Lenovo. You see, what Lenovo says is, Lenovo.Modern.ImController.exe stands for Lenovo Modern Interface Management Controller. It seems Lenovo is getting modern with its firmware built, indeed.

However, this Lenovo modern IM controller file manages the operating system and specific Lenovo hardware system. So, obviously, it eats up your valuable space. And if you are thinking of uninstalling it, beware!

But do you know why people want to delete this? Because of the Lenovo modern IM controller high CPU usages sometimes seem to slow down the PC.

Well, you are running a system file, and you need to know that it is safe for your laptop or computer or not. The Lenovo system interface foundation driver supports the Lenovo Vantage application by collecting system services, drivers, and plugins. So, before deciding on uninstalling this file, look at how to uninstall this built-in setup file in a secure way.

When you find the Lenovo modern im controller using memory extra, you can free up your memory by uninstalling it.

Due to Lenovo modern imcontroller high ram usages, you have to be careful to delete this interface foundation.

You can delete this system interface foundation service in another way. It is up to you to choose any one method to uninstall IM controller. The second method is

After upgrading your Windows system, you may see, Lenevo imcontroller downloads different antivirus files and other software to improve your PC experience. And you may not need them crucially. And definitely, It will consume your CPU must.

Remember, sometimes Lenovo modern imcontroller pluginhost appears in good behavior, but if it eats up lot of space on your program can be leading to another problem. You may see the issues that are given below:

If Lenovo modern imcontroller eats extra spaces of your computer or laptop memory, and you don’t want to uninstall it at the same, fix this problem by following ways and get rid of it.

Go to your C drive and find out the software distribution service. Clear this data by c:\windows\softwaredistribution\download directory.

You have to find the issue with the windows update c++ distribution package, and then the above ways will work. Now reboot your windows to look for updates.

If you are stuck on this problem and did not fix the issue, check if the Lenovo modern im controller is safe or a virus?

Your windows location will help you to find out it is a virus or not. Like if your exe file runs from C:\ProgramFiles\Lenovo\ImController\AutoUpdate. exe then check your task manager.

Go to the column sides and click on it to verify. Then select the image path name to add your column location in your task manager.

You can easily find out the issue, and the tools help you to detect destructive processes.

If the plugin host says unable to verify, you can be sure there might be a virus. Then you should uninstall this program or delete it.

To delete this Lenovo modern imcontroller, you must run Malwarebytes, a complete security application.

Do I need Lenovo IM Controller?

Lenovo imcontroller optimized the system services and supported your software. But modern imcontroller is not really necessary for your PC otherwise it will cause many problems and eats lots of spaces of your laptop or computer.

yes, though Lenovo imcontroller is preinstalled program, you can remove this interface foundation by uninstalling it.

When your verified signer says to unable to confirm, it might be a malware virus. And the extension runs into the background. But the Lenovo modern controller plugin host is not a virus but takes huge space and creates the virus problem.

Now it is evident above what is Lenovo imcontroller. These file executed applications help your laptop to communicate with several apps. Many people do not know about Lenovo’s modern interface managing controller files.

It is safe, and you can disable the useless part. Lenovo IM controller is to support your windows, and this modern pluginhost.exe is the framework to ease your Windows 10 PC, which is compatible with the 32 to 64 bits systems.

Sometimes Lenovo interface controller can affect certain functions of your PC. From the windows control panel, you can easily uninstall the modern controller program.